NASA and the DustBuster 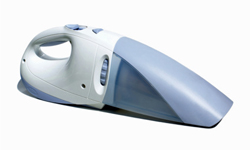 Do you bust your dust?
©iStockphoto/Thinkstock

If you have a small amount of dust or dirt on your floor, you might reach for a portable, hand-held vacuum cleaner to get the mess cleared away. It's quick and easy to use, cordless and rechargeable, and can easily clean up most small messes with little effort. The earliest version of the hand-held vacuum cleaner, the Mod4 system, was first introduced by Black and Decker in 1975. Four years later, the infamous DustBuster made its debut in the United States, and our kitchen countertops and floors haven't been the same since. Vacuum cleaners at the time were large and heavy, and probably too often kept in the closet when small spills occurred. The DustBuster was revolutionary, as evidenced by the million-plus units sold in the first year alone, and more than 100 million total since then [source: Black and Decker].

It's probably no surprise that you have NASA to thank for this technology. However, it wasn't the exploration of the vacuum that led to the DustBuster. Engineers at Black and Decker were working with NASA at the time to develop a cordless and self-contained power drill for use on the Apollo moon landings between 1963 and 1972. This advancement led to some brainstorming on the part of Black and Decker for all kinds of cordless household appliances. The key to all of the technology was a computer program that Black and Decker developed to ensure that the battery-powered drill had a motor that could perform well with a minimal amount of power consumption. It would only be a few years later that Black and Decker applied this same breakthrough to the cordless Mod4 system and then later on the DustBuster.