What did NASA contribute to the art world? 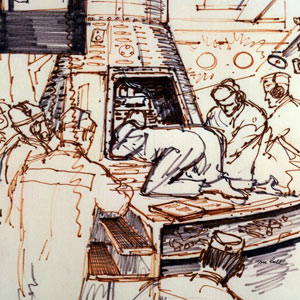 An original drawing from the NASA Art Program dated May 15, 1963 -- the day NASA launched its Faith 7 capsule on the Mercury-Atlas 9 mission.
Courtesty of NASA Langley Research Center

Most great periods in history are celebrated through artwork, and in 1962, two men decided the United States' foray into the heavens by the National Aeronautics and Space Administration (NASA) should be no exception. Just four years after NASA's inception, then NASA administrator James Webb and artist James Dean decided to commission artists working in various mediums to create artwork inspired by the agency and its space exploration as part of an official NASA Art Program.

In additional to recording a momentous era, they figured space-related artwork would also be a way to help educate people about NASA and its mission -- and re-create some of the magic of space exploration that photographs just couldn't capture.

In 1963, NASA invited the first group of artists selected to watch the final launch of the Mercury Program, astronaut L. Gordon Cooper's 34-hour orbital mission in the spacecraft Faith 7. After that, the artists went to work with pretty much no limitations on what they could create. The resulting pieces became part of NASA's first exhibit at the National Gallery of Art in Washington, D.C.

Since then, about 350 artists -- including luminaries such as Norman Rockwell, Annie Leibovitz and Andy Warhol -- have watched launches and landings, and traipsed throughout all of NASA's facilities, inspiring them to produce some 3,000 pieces of artwork. Most of their works reside with NASA or the Smithsonian National Air and Space Museum, which sends traveling exhibitions around the world to make the collection more accessible.

In addition to paintings, sketches and sculptures, NASA's art collection includes poetry, dance and even a few songs. In 2002, for example, the Kronos Quartet performed American composer Terry Riley's "Sun Rings," a multimedia ode to the Earth featuring celestial sounds and images collected from space. Another NASA-commissioned piece, "Way up There," written by Tena R. Clark and performed by Patti LaBelle to celebrate the Centennial of Flight in 2003, was nominated for a Grammy.

In yet another effort to showcase space exploration through the arts, NASA co-sponsored a space-themed arts-and-crafts contest in 2010 with Etsy.com, an online site matching creators of homemade fine art and crafts with buyers.

And in some cases, even when NASA hasn't intentionally tried to promote the arts, it has. For example, some glass artists use NASA technologies involving foam insulation, alumina crucibles and graphite boards to help create their artwork. So both by design and by chance, NASA has made a significant impact on the art world. To learn more about a couple of NASA-related artists, read on to the next page.

In 1962, Paul Calle was just another commercial artist. Then, NASA came calling. Calle was invited to be part of NASA's inaugural art program, along with seven other artists, including Norman Rockwell. Over the next decade, Calle was often at Cape Canaveral, watching launches and landings.

In 1969, Calle observed astronauts Neil Armstrong, Michael Collins and Edwin "Buzz" Aldrin as they ate breakfast, put on their spacesuits and completed all the other preparations for their Apollo 11 mission. Calle's resulting pen-and-ink sketches ended up on exhibit at the National Air and Space Museum. Several years later, he produced a large oil painting of Armstrong stepping on the moon.

But Calle is probably best-known for his work in a much smaller medium. The United States Postal Service was impressed with Calle's art and approached him several times over the years to create commemorative stamps. His first stab, in 1967, resulted in a pair of 5-cent stamps depicting astronaut Ed White making the first American spacewalk in 1965, just outside of the Gemini capsule. The stamps created a complete picture whether they were used as a pair or individually, which was a new concept in postal stamp design at the time.

Over the years, Calle also created stamps of other important people and objects, including General Douglas MacArthur, Robert Frost and the Vietnam Veterans Memorial. When he died in 2010, he was considered one of America's top stamp artists.

To Space and Beyond

Many artists who depict outer space and space missions are Earth-bound. Others have experienced their subject first-hand. For example, former Soviet cosmonaut Alexei Leonov, the first man to walk in space, created color sketches during his two space flights, then paintings from the sketches once he was back on solid ground. His artwork has been displayed in the Smithsonian National Air and Space Museum.

American astronaut Alan Bean also turned to art after coming back down to Earth. Bean was the fourth man to walk on the moon as part of Apollo 12, the second lunar landing. In 1981, he suddenly left NASA to pursue his long love of art. Bean's impressionist-inspired artwork is often space-themed.