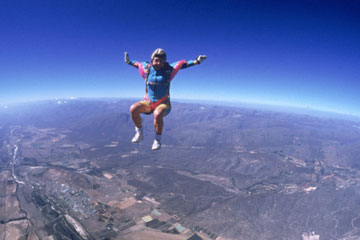 Skydiving Image Gallery You might be up for skydiving, but would you dare dive from space? See more skydiving pictures.
Max Dereta/Workbook Stock/Getty Images

Space tourism will be a reality within the next 20 years -- or sooner. Passenger spaceships will take you on a trip to the moon, around the Earth's orbit -- or beyond. But getting there is only half the fun, according to a company called Orbital Outfitters. Founded by ex-NASA surgeon Jonathan Clark and businessman Rick Tumlinson, O.O. has invented the most extreme sport ever, as well as the first ever space sport: space diving. This will entail skydiving from high above the Earth's atmosphere all the way back down to the surface.

The company is working to develop the necessary equipment that would make a planetary dive possible (and also safe), aiming for an open-for-business date of ten years from now. The company's first major hurdle (which they had hoped to demonstrate in 2009) is to break the current world skydiving record -- 108,200 feet (31,333 meters) by Col. Joe Kittinger in 1960 -- with a dive of 120,000 feet (36,576 meters). Their next big goal would be to attempt a 60-mile (96.5-kilometer), suborbital dive; but their ultimate aim is a dive from orbit.

Here's how it would work: A space-diver launches into space, harnessed into a holding area on the open deck of a passenger rocket wearing a state-of-the-art spacesuit. Normally, skydivers undo their harnesses and hurl themselves out of an open plane at around 30,000 feet (9,144 meters). The space-diver would hurtle into the dark expanse of space at an altitude of 150 miles (241.4 kilometers). For comparison's sake, that's like jumping from Los Angeles and ending up in San Diego.

For the next seven minutes, the diver free-falls at speeds of up to 2,500 miles per hour (4,023 kilometers per hour). Once that threshold is reached, the diver's specially designed suit discharges a drogue chute (a parachute designed to slow the thing that's falling) in order to stabilize descent and fight the vacuum-like effects of space upon re-entry into the Earth's atmosphere. At about 3,000 feet (914.4 meters) above the ground, when the inner atmosphere is reached, the falling speed drops to a relatively slow 120 miles per hour (193.1 kilometers per hour). Then, a conventional parachute opens, and the space traveler safely floats down to the ground.

In other words, the space diver is like a meteor hurtling through space and into Earth's atmosphere, except that most meteors burn up and break apart upon entry. That happening to a human being would be a major deterrent against the sport, but Jonathan Clark theorizes that it might not be a concern. He believes that proper protection, such as thermal coatings, a decent oxygen supply and an aerodynamic heat shield, would protect the diver. He also believes that the human body is too small to bust apart on re-entry, as a meteor would [source: Popsci].

Of course, the right equipment, when used properly, makes all the difference when you're diving from outer space. The most important piece of equipment is the suit. Orbital Outfitters has designed a one-piece, airtight jumpsuit with a detachable helmet outfitted with a see-through quartz faceplate. (Gloves and boots are also worn.) A liquid-cooled thermal regulation system runs throughout the suit, which protects the human body against the extreme temperatures of the descent, which can reach 464 degrees Fahrenheit (240 degrees Celsius). All attachment points and openings on the suit are airtight so as not to leak oxygen, which could be a deadly mistake.

On the back of the suit are small, rocket-like gas jets that stabilize the body during the disorienting period of weightlessness in the early part of the space dive. A closed-loop oxygen system circulates through the airtight suit, using chemical scrubbers to remove all carbon dioxide from the recycled air, allowing the oxygen to be recycled for the duration of the dive. More importantly, it eliminates the need for a large air tank -- only a small one strapped onto the diver's back is necessary.

The suit's design also protects against the vacuum of space. The nitrogen found in blood erupts into bubbles at extremely high altitudes (as they do in deep-sea conditions). This is what creates the extremely painful and potentially deadly condition called "the bends." Air becomes depressurized and uninhabitable for humans above 63,000 feet (19,202 meters), so the suit has to be pressurized. Otherwise, the water in blood turns to gas, making the blood feel like it's boiling (and, eventually, causing death).

Other than the ambitious and exciting (or scary) possibilities space diving and its equipment hold for sports, it actually has some practical implications. Those special suits designed by Clark and company could one day be used as a emergency backup for astronauts who need to bail on a malfunctioning aircraft either just inside of or just outside of the Earth's atmosphere. In fact, that was Clark's inspiration. Sadly, his wife was among the astronauts who died in the 2003 Space Shuttle Columbia explosion. Further, space tourists could wear Clark's suits for extra safety when going for a ride outside our atmosphere.