How are NASA golf balls different? 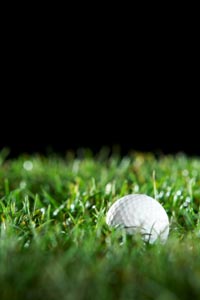 Russian Cosmonaut Mikhail Tyurin awkwardly braced his bulky space suit against the exterior of the International Space Station. While a colleague steadied his feet, Tyurin used a golf club strapped to the outside of his space suit and took a swing at a golf ball suspended in a mesh met. "All right. There it goes," announced Tyurin to ground controllers [source: Goddard]. Accelerating to more than four times the speed of sound, the tiny ball vanished from view. Element 21, the Canadian golf manufacturer that had paid for the stunt, was delighted.

According to NASA estimates, Tyurin's ball spun around the earth for three days -- traveling for hundreds of thousands of miles until it burned up in the Earth's atmosphere. Hailing from a small city in the western part of the Soviet Union, Tyurin had never strapped on a pair of golf shoes in his life. But 220 miles (354 kilometers) above the Pacific Ocean, he effortlessly pulled off history's longest golf stroke.

Tyurin isn't the only golfer using the space program to get a leg up on his golf game. In the mid-1990s, the Tennessee-based Wilson Sporting Goods Company used NASA technology to craft a line of high-tech golf balls designed to fly further than ever before. The key was in the dimples -- the tiny craters arranged on a golf ball's exterior. Dimples had been featured on golf balls ever since the early 20th century, but manufacturers were never sure which dimple pattern made for the best ball. In the lab, they'd simply try out numerous different sizes and configurations of dimples until they settled on whichever design seemed to send the ball farthest.

Wilson teamed up with NASA to crunch the numbers of what makes the perfect dimple pattern. Using technology that had originally tested the space shuttle's orange external fuel tank, engineers put together a computer model showing the exact aerodynamics of a ball. Armed with the new knowledge, Wilson designers set about crafting a mathematically perfect golf ball.

The result was the Wilson Ultra 500, a ball that took small, medium and large dimples and arranged them into precise pyramids that would ensure smooth airflow over the entire surface of the ball. The Ultra 500 was "the most symmetrical ball surface available, sustaining initial velocity longer and producing the most stable ball flight for unmatched accuracy and distance," claimed Wilson. To this day, the gift shop at Florida's Kennedy Space Center usually has a few boxes of Wilson's space-age golf balls on hand.

If NASA can make golf balls go further, can they make your golf shoes smell better? Read on to find out how.

Other NASA Technology on the Golf Course 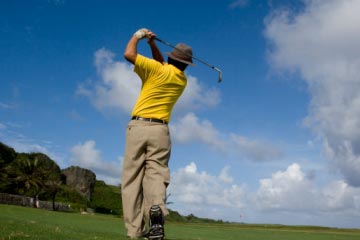 There no word yet on whether or not NASA can help with your swing.
flashfilm/Lifesize/Thinkstock

Shooting rockets into space and shooting tiny golf balls onto the green have much more in common than you'd think. Ever since the 1960s, whenever NASA has debuted a new material or technology, the $76-billion-a-year golf industry has always been happy to find a way to equate the sport with high-tech space research.

Before NASA sends anything into orbit, the organization makes sure to send it through a dizzying array of tests -- some of which involve high speed cameras able to snap dozens of pictures per second. When the Ohio-based Ben Hogan Company wanted to study how its golf balls spun after being hit, the company struck a deal with NASA to have a golfer tee off in front of NASA's cameras. By analyzing and reanalyzing the slow-motion images, Ben Hogan Company designers were able to engineer carefully the spin characteristics of their next golf ball.

For years, NASA has been working with the Connecticut-based Memry Corporation to develop a flexible metal that would allow a spacecraft to fix itself after being struck by a micrometeorite. Using a process known as "shape memory effect," astronauts would simply heat the metal until it snapped back to its original shape. While it's not as dramatic, the Memry Corporation also adopted a similar type of flexible metal to create a golf club that bends ever-so-slightly when it strikes a ball, giving the golfer a split-second more control. Who knows? NASA's self-repairing metal could also one day be used to help repair the bent clubs of temperamental golfers.

Space technology may even take credit for less foot odor on the green. Some high-end golf shoes now include Outlast, a fabric equipped with hundreds of microparticles that are able to absorb or release heat. With temperatures in low Earth orbit at about -382 degrees Fahrenheit (-270 degrees Celsius), Outlast was originally designed to keep spacewalking astronauts comfortable while building the International Space Station. On Earth, the material's temperature-regulating abilities can cut sweating in golf shoes by almost 50 percent. With about 4 ounces (0.12 liters) less sweat floating around in your socks after a golf game, the effects on foot hygiene should be sweeping.