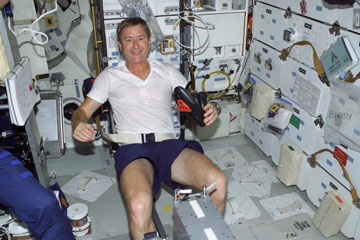 Exercise isn't just for Earth-bound athletes -- astronauts have to keep in shape while they're in space. See more astronaut pictures.
Getty Images/Getty Images

All NASA astronauts face weightlessness in space. The long-term effect of prolonged time spent in a gravity-free environment is that it weakens the body. Space flights cause muscles to atrophy and bones to decrease in density. To prevent that, or at least limit the damage, NASA has athletic trainers and physical rehabilitation technicians on staff to get astronauts in shape for space flights. Trainers also teach astronauts how to keep their bodies in ideal shape during the flight and then work with them to restore their physical condition once they've returned to Earth.

Trainers have developed various exercise and strength training regimens for each stage of the mission. They focus predominantly on multiple-joint, weight-bearing and lower-body exercises to address the parts of the body that are typically most weakened by the lack of gravity. Muscle atrophy and bone density loss is most likely to occur in the lower body, which is used less than the arms and torso in space due to weightlessness. Activities like standing and walking give our muscles and bones a constant workout on Earth; but in space, they hardly get used at all.

NASA research and development of training programs and machinery to prepare, maintain and rehabilitate astronauts has contributed substantially to the general body of knowledge on physiology (exercise science). It has also resulted in commercially available, NASA-inspired exercise and physical therapy equipment.

Studies conducted by NASA on the effects of space travel on the body -- studies that began in the early days of the space program, before anyone had even left the Earth yet -- demonstrated that prolonged exposure to the low-gravity environment of space led to a decreased amount of calcium in bones, misshapen blood cells and an extra layer of fat around the heart (related to the decreased level of physical activity). NASA doctors conducted post-flight examinations of astronauts, all of whom experienced bone and muscle density loss. The agency decided that it would have to develop exercise programs and equipment specific to the particular needs of astronauts.

Prior to the launch of NASA's Skylab space station in 1973, the agency hired Boeing engineer Gary Graham to devise a cardiovascular exercise machine that would keep the heart in shape and optimize blood flow. Astronauts would also have to be able to use it in space. Graham and his team at NASA ultimately produced an exercise machine for astronauts called the CMC Shuttle 2000.

To use the CMC Shuttle, astronauts lie on their backs on a carriage that glides on a rail. Next, they push their feet off a kick plate and then pull themselves while holding on to adjustable elastic cords that provide resistance. With every repetition, the machine moves the user's diaphragm and exercises the chest cavity, attracting blood to the heart and helping maintain both heart health and overall blood flow.

Astronauts used the CMC Shuttle on the 84-day Skylab mission from 1973 to 1974. Based on observations of the hearts, muscles and blood flow of the astronauts who used it in-flight, further refinements were made to the design. A company called Contemporary Design licensed the technology from Graham and NASA in 1991 and produced a commercially available piece of equipment called the Shuttle 2000-1. Primarily found in diagnostic and rehabilitation environments, it's one of the few machines to be used by patients on bed rest. Not only does it keep these patients' hearts healthy and their blood flowing properly, the Shuttle 2000-1 prevents seldom-used bones and muscles from atrophying.

High-level athletes also use the Shuttle 2000-1. The exercises performed on the machine -- called plyometrics -- provide strong, fast, muscle contractions. These exercises treat muscles like loaded, coiled springs, providing huge bursts of speed and power when released. So, whether the need is for rehabilitation, maintenance or taking the body to the next physical level, a machine developed by NASA for astronauts makes it possible.

In the late 1980s, NASA researcher Robert Whalen was tasked with finding ways to help astronauts maintain their strength with new in-flight, in-space exercises. For a body in space to maintain its normal physical condition, exercising requires weights to simulate the effects of gravity on Earth. Whalen proposed using differential air pressure in space flight exercises. Weighing down astronauts with air while they exercised would mimic gravity, thus preventing bone and muscle degradation.

Up to that point, mid-flight exercise for astronauts was both difficult and imperfect. NASA's standard equipment was a steep, anti-gravity treadmill. To stay in place, astronauts were harnessed to the machine. Not only was that uncomfortable, but it stifled the movement of the muscles it was supposed to be aiding. Whalen altered the treadmill concept by applying high forces of air pressure specifically calibrated to match the effect gravity would have on that astronaut.

Whalen's G-Trainer resembles a treadmill encased in a bouncy castle. The user climbs into an airtight hole above the tread. Once there, the astronaut runs or walks, and the machine calibrates the inflatable sections, applying air pressure to the astronaut's weight, lifting the body as needed to push back on the lower body and providing the same service manually that gravity does naturally.

In 2005, NASA and Whalen licensed the patent for the G-Trainer to a company called Alter-G, Inc, which adapted the machine for both medical use and athletic training. Its AlterG Anti-Gravity Treadmill provides support for physical rehabilitation patients with diminished lower-body strength. But there's one big difference between it and the NASA model, because, technically, the treadmill does on Earth the opposite of what it does in space. In space, the air adds weight and provides healthy resistance. On Earth, it unloads weight. Today, the G-Trainer is used widely in rehab centers, military hospitals and in the training facilities of both professional and college sports teams.