How has NASA improved food safety? 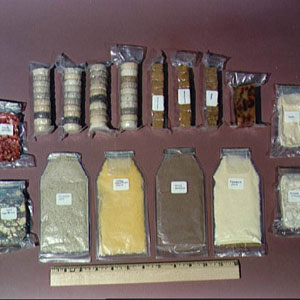 When you think of NASA and food, dehydrated food pouches (like the ones the Mercury astronauts used) probably spring to mind.
Image courtesy of NASA

When you consider the connection between NASA and food, your first thought might be of dehydrated "space" ice cream. Or perhaps you picture astronauts squeezing food out of tubes like toothpaste. You'd be correct, but that's only part of the story. NASA technology has resulted in much more than just freeze-dried, oddly-packaged food. It has led to advancements in many different areas of food preparation here on Earth. In fact, NASA essentially invented an approach to food safety that is used in numerous areas of the food industry today.

It all started while NASA was planning how to feed astronauts in the first manned space program. In addition to being nutritious and space-friendly (meaning, it won't crumble in zero gravity), the food needed to be free of toxins and safe to eat.

NASA contracted with the Pillsbury Company in 1960 to develop food products for space. At the time, food safety programs were based on inspecting the end product, which wouldn't work for the astronauts' specially-developed food because so much testing would be required. Neither Pillsbury nor any other commercial company could guarantee uncontaminated food for the astronauts.

NASA and Pillsbury developed a system that was based on preventing problems from occurring in the first place. The Hazard Analysis & Critical Control Points (HACCP) system requires the identification of stages during the manufacturing process that could result in a food safety hazard. Once the potential hazards are found, they can be minimized or eliminated through monitoring. The system worked so well for NASA that the lead Pillsbury scientist, Dr. Howard Bauman, advocated that Pillsbury adopt it, too. Following two national food-safety scares in the early 1970s, the FDA asked Pillsbury to conduct an HACCP training program for FDA inspectors of canned food factories. Today, the FDA and the USDA have mandatory HACCP programs for meat, seafood and juice processing. Other food industries, including restaurants, have also voluntarily adopted HACCP.

But NASA's influence on food safety practices didn't end with HACCP; read on to learn about the agency's latest contribution to safer food.

The latest NASA food safety spinoff is all about purifying the air around the food to make it safer. The 1995 space shuttle Columbia mission included an experiment to demonstrate how food could be grown in greenhouses by astronaut pioneers on the moon. This experiment consisted of a small greenhouse fitted with a special device to reduce the amount of ethylene buildup. Comprising carbon and hydrogen, this gas is produced naturally by plants and helps them ripen. In the sealed environment of a space greenhouse, ethylene gas can build up, making food plants ripen too quickly and begin to spoil.

In order to increase the lifespan of crops grown in space, the ethylene has to be removed. NASA invented a device called an ethylene scrubber, which circulates the greenhouse air through tubes coated in titanium dioxide and then exposes it to ultraviolet light. The resulting chemical reaction converts the ethylene gas to water and carbon dioxide -- both of which are good for plants. Aboard the Columbia, the ethylene scrubber successfully preserved a batch of potato seedlings for the duration of the mission.

In 2001, two companies paired up to license this NASA technology for commercial food use under the name AiroCide. Further NASA testing had shown that the scrubber not only removed excess ethylene to kept perishable food fresh longer, it also killed potentially dangerous airborne pathogens such as viruses, mold, bacteria and fungi. KesAir claims that AiroCide even removes bad odors. Many grocery stores, food processing plants, food storage companies and restaurants have installed units to both prevent food from spoiling and reduce the spread of foodborne illnesses.

Refrigerators containing the technology are also available for home use. Unlike traditional air filtration systems, AiroCide units don't use chemicals or create any dangerous byproducts such as ozone.

AiroCide technology has also been marketed for use in health care settings. In addition to killing the types of organic compounds normally found on food or in food processing and storage areas, it has also been shown to kill bacteria such as influenza and MRSA, as well as viruses like swine flu -- "virtually all known airborne germs and diseases" [source: Spinoff].

Why Does Beer Get Skunky?
Academics Worry That Predatory, Pay-to-Publish Journals Hurt Science
How can studies on mice apply to humans?