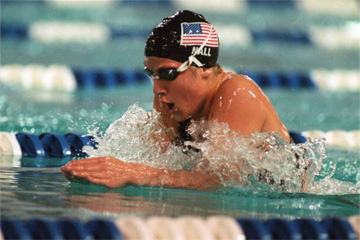 A riblet may sound more like a barbecue restaurant appetizer than a NASA drag-reduction technology, but don't tell that to the athletes that swam to victory at the 1995 Pan American Games. Their riblet-enhanced suits helped them take home 13 gold medals, three silver medals and one bronze medal.

NASA's Langley Research Center developed riblets -- tiny, v-shaped grooves angled in the direction of fluid flow -- in the early 1980s to reduce drag caused by friction on the aircraft's surface. Although they're no bigger than a scratch, the tiny ridges have a powerful effect on aerodynamic drag (the force that slows an object as it moves through a fluid) because they alter turbulent airflow near the skin [source: NASA; "NASA Riblets for Stars & Stripes"].

Air and water are both fluids, so it was only natural that someone would hit upon the idea of putting the riblet's aerodynamic edge to a hydrodynamic use. Enter Arena North America, a swimwear company that incorporated riblets into its Strush SR swimsuit and customized their arrangement to maximize efficiency for four different strokes. The improvement, so clearly on display at the Pan American Games, quickly sent ripples through the swimming world.

Humans are poorly suited to swimming because our bodies churn up copious amounts of drag. In fact, for you to double your swimming speed, you would have to pump out eight times as much power as usual; even a 10 percent speed improvement would require a 33 percent power increase [source: Nelson]. Similarly, a small reduction in drag will result in a marked improvement in speed and efficiency.

According to Arena, its ribbed suit was flume tested to be 10-15 percent faster than its competitors' suits. Flume testing, in case you're wondering, involves placing a swimmer in a small pool featuring side windows, cameras or other monitoring equipment. Pumps recirculate the water at a desired rate, so that it acts like a conveyor belt for swimming in place.

Riblets found applications in other areas involving fluid dynamics as well, including reducing friction and drag inside pipes and ducts. They've also bolstered the efficiency of pumps, heat exchangers and air conditioners. Regatta craft designers have incorporated the tiny striations into the hulls of eight-oared shells. In 1987, the Stars and Stripes racing yacht sported a riblet-coated hull when it returned the America's Cup to the United States.

The riblet represents one type of technology transfer between NASA and industry: applying an innovation to a similar or related use. As we'll see in this next section, sometimes NASA also helps industries make a splash by lending its facilities and expertise.

From Riblets to Water Corsets: the Speedo LZR 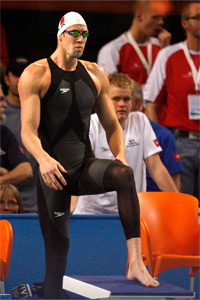 The heyday of the riblet has largely come and gone, but NASA's involvement in cutting-edge swimsuit design continues to be felt.

In 2007, NASA collaborated with Speedo to develop the LZR Racer, billed by Speedo as the world's fastest swimsuit. Before it was banned from competition (along with other high-tech bodysuits), the garment propelled swimmers to dominate their events at the Beijing Olympics. In fact, every gold medal in swimming at the games was won by an athlete wearing the LZR suit.

"People were breaking contracts with their suppliers and switching to LZR suits instead," said Daniel Lockney, spinoff program specialist in the NASA Office of the Chief Technologist.

The LZR demonstrates another way that NASA spins off its technology. Instead of developing the suit, the space agency provided the facilities and expertise that helped Speedo work out the kinks.

The suit was tested and computer modeled at NASA's Langley Research Center, where Speedo designers repurposed a wind tunnel normally used for aeronautics research to test around 100 fabrics to see which ones produced the least drag. The wind tunnel helped them perfect the design by testing for hydrodynamic characteristics and surface friction [source: Lockney].

Speedo's Langley testing produced a low-drag suit that was both lightweight and water-resistant. To reduce drag, designers came up with a streamlined zipper and eliminated stitching and joinery wrinkles by welding the fabric together ultrasonically. The resulting seams reduced drag by 6 percent and generated only slightly more friction than the fabric itself. The bonded and hidden zipper kicked up 8 percent less drag than a sewn zipper [source: Turner].

NASA and Speedo took the swimsuit a step further, however. Just as an aircraft or watercraft might be reshaped to improve fluid flow around it, the LZR swimsuit reshapes a swimmer, compressing key areas to make a faster shape -- like a corset for swimmers. According to Speedo, the compression saves energy by helping swimmers maintain proper form and accounts for a 5 percent gain in efficiency.

There you have it: Two ways NASA helped revolutionize the sport of swimming without setting out to do anything of the sort. It's all part of the exciting and often surprising world of NASA spinoffs.