What does NASA have to do with sewage treatment? 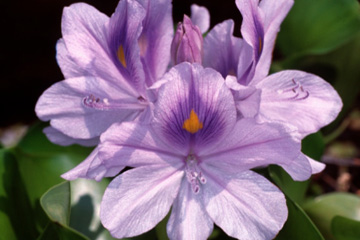 Do pretty flowers like these come to mind when you think of NASA or sewage? Probably not -- but maybe they should.
Cristina Merlo/Getty Images

In space, no one can hear you flush. But that doesn't mean that human waste isn't an issue for NASA scientists and engineers. The conventional space toilet stores solid waste for the return trip home and jettisons the liquid into the void. But what about really long-term missions, like proposed flights to Mars or beyond? Couldn't all that waste be put to better use?

Starting in the 1970s, NASA researchers began looking into ways to recycle human waste as fertilizer for space gardens and even turn wastewater into clean drinking water [source: Wolverton]. Around that time, a researcher named Bill Wolverton discovered that swamp vegetation in Florida was successfully cleaning up waters that had been polluted with Agent Orange from a nearby military facility. NASA brought Wolverton to its Stennis Space Center in Mississippi to lead a team of researchers studying the potential of plants to clean up manmade pollution [source: NASA].

A conventional wastewater treatment facility employs two processes: mechanical and biological. In the mechanical portion, filters screen out large debris and smaller bits of solid waste are settled out in sedimentation tanks. Then the wastewater is primed with air and a thick slurry of bacteria that eats away at remaining organic matter. The bacteria are settled out in a second sedimentation tank and the remaining water is disinfected with chlorine or pulses of ultraviolet light to kill all remaining bacteria [source: EPA].

The wastewater treatment system at Stennis, however, can accomplish the same level of purification at a fraction of the cost. Wolverton discovered that the common water hyacinth -- a weed-like scourge in semi-tropical climates like the American South -- literally soaks up sewage. The real cleanup crew isn't the plant itself, but bacteria living on the hyacinth's tiny root hairs that break down the organic matter in sewage into nutrients that the plants can absorb [source: Stayton]. As an added bonus, water hyacinths also soak up heavy metals and other organic chemicals -- something conventional treatment methods can't handle.

Hundreds of towns and small cities across the South have built inexpensive hyacinth lagoons to filter and purify their wastewater based on NASA's Stennis center model. The only challenge left for NASA is to figure out how to incorporate the successful plant-based technology to recycle wastewater on the space station of tomorrow.

For lots more information on space science and technology, click on the links on the next page.

How Yogurt Works
There’s a Study on That: Are People Born on the 13th Unlucky for Life?
10 Cool Inventions From the 1980s