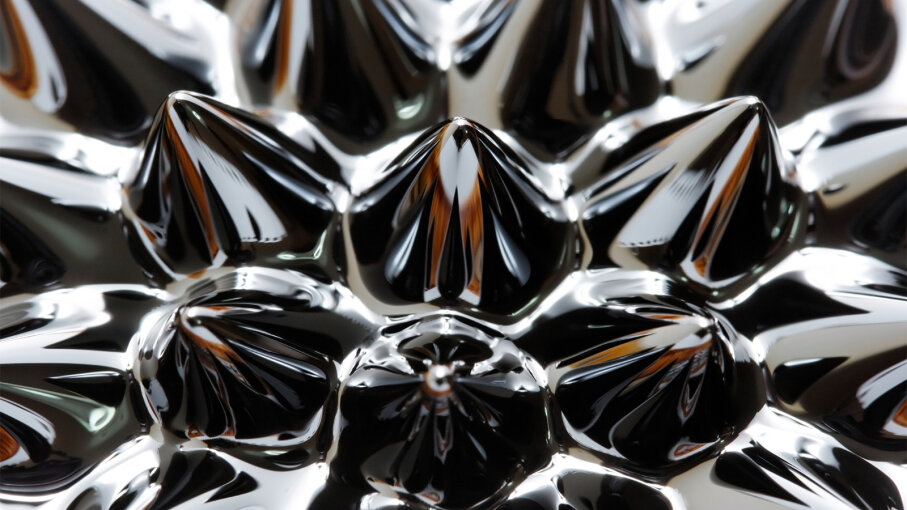 Ultra close-up of a ferrofluid, or magnetic colloidal liquid, which becomes strongly magnetized in the presence of a magnetic field and can be used in ways that solid magnets cannot. virtualphoto/Getty Images

Back in the second century B.C.E., the Chinese developed a spoon-shaped compass made of lodestone, or magnetite ore, which was capable of helping them figure out the directional position of north. Since then, inventors have found all sorts of other ways to use magnets, ranging from magnetic audio and videotapes, to computer hard drives and MRI machines for scanning the insides of the human body, to those magnets that you use for sticking your kids' drawings to the refrigerator door.

Up to this point, magnets have been made of solid materials. But now, in an article published July 19, 2019, in the journal Science, researchers at the U.S. Department of Energy's Lawrence Berkeley National Laboratory reveal that they've figured out a way to make a 3D-printed magnetic device out of liquid.

Liquid magnets could be fantastically useful for creating tools that range from artificial cells that deliver cancer-killing medication, to flexible liquid robots that can change their shape and adapt to their surroundings. (Maybe T-1000 from "Terminator 2: Judgment Day" isn't so far-fetched after all.)

"We've made a new material that is both liquid and magnetic. No one has ever observed this before," said Tom Russell, a visiting faculty scientist at Berkeley Lab and professor of polymer science and engineering at the University of Massachusetts, Amherst, said in a press release. "This opens the door to a new area of science in magnetic soft matter."

Russell and Xubo Liu, the study's lead author, got the inspiration to try to form liquid structures from ferrofluids — solutions of iron-oxide particles that become magnetic in the presence of another magnet.

They used a 3-D printer to make tiny droplets, just 1 millimeter across, from a ferrofluid solution containing iron-oxide nanoparticles that crowded at the droplet's surface. The research team then put the droplets in a solution near a magnetic coil. When they removed the coil, the droplets gravitated toward each other and became permanently magnetic.

Now That's Interesting
Back in 2013, scientists constructed a tiny magnet made of just five iron atoms.