by Tracy Staedter May 11, 2017
A prototype of the exoskeleton at the Rehabilitation Center "Fondazione Don Carlo Gnocchi" in Florence, Italy. Those gray bumps on the hands and wrist in the photograph are reflective markers. Theyre used when the subject is videotaped walking with ... Hillary Sanctuary/EPFL

Almost every second of every day an older adult falls in the United States. That's approximately 29 million falls per year and nearly 27,000 deaths, according to the Centers for Disease Control and Prevention. A new wearable exoskeleton that counteracts the loss of balance when a person slips could prevent those accidents by keeping the elderly — as well as the physically impaired — steady on their feet.

Still in the prototype stage, the Active Pelvis Orthosis (APO) system comes from researchers at Scuola Sant'Anna in Italy and EPFL (Ecole polytechnique fédérale de Lausanne) in Switzerland, who wanted to make a lightweight, wearable exoskeleton that could detect signs of balance loss and assist with balance recovery, only when needed. That capability doesn't exist in any of the wearable exoskeletons available today, says Vito Monaco, assistant professor at the BioRobotics Institute, and lead author on a study about the exoskeleton that appears today (May 11) in Scientific Reports.

Other exoskeletons, either in development or on the market today, assist with movement and make heavy objects feel lighter. While wearing one, warehouse workers can lift heavy boxes they wouldn't be able to pick up on their own, for example. Soldiers can carry heavy backpacks and walk miles without growing tired. Mobility impaired people can walk again after using a wheelchair or needing crutches for years. But none of these devices predict what the wearer is going to do next and take measures to correct a wobbly move.

"We wanted to verify that these devices could assist people and improve their capabilities," says Monaco.

The 3-kilogram (6.7-pound) exoskeleton was built entirely from scratch by the research team and is designed to be worn on the lower half of the body. A waistband connects to two movable carbon fiber braces, each one positioned on the outer side of a thigh. Tiny motors and so-called "adaptive oscillators" in the computer circuits use a special algorithm to detect the wearer's unique gait. That part takes just a few minutes.

While wearing the exoskeleton a person may feel the braces and the motors pushing slightly on their thighs. If their stride deviates from normal, the motors create a torque in the braces that cause them to stiffen up and push a little more strongly against the thighs, which provides stability.

For the experiment, Monaco and his colleagues worked with 10 subjects, two who were amputees with an average age of 65.5 and eight who were elderly, with an average age of 68.9. The subjects wore the exoskeleton while walking on a split-belt treadmill, which has two belts that can each be moved independently to induce slipping. The participants also were strapped into a suspended safety harness to prevent them from falling, should the exoskeleton not work.

To see how well the APO worked, the researchers had each person walk on the treadmill while wearing the exoskeleton, which can be adjusted to work in an assistive mode or not.

They found that in all cases, the APO detected a deviation in stride in about 350 milliseconds and engaged the motors in time to provide stability and prevent a fall. The device provided stability only when needed and at the amount necessary, never providing too little or too much.

"It basically increases the stiffness at hip joints according to the situation," says Monaco.

Although the prototype worked with all 10 subjects, the team needs to do additional experiments to test how well it might function with a broader population and on different terrains.

Monaco says he was really surprised that the device worked as well as it did. "We were in a very controlled condition. Everything was well-controlled. But there are still several variables we could not take into account," he says. "The most important is the person."

Every person has his or her own distinct stride.

"We were surprised that the same strategy worked for almost all of the people," he says.

But they have more work to do.

"Basically we investigated one main cause of fall, which is slippages, but we know that slippages and tripping are the most common cause of falls," Monaco says. "Seventy percent of all falls occur because of slippage or tripping."

To account for both, they need to make the algorithm as generic as possible in order to manage the differences. But he doesn't think it will take long.

"In the next three years, we hope to develop something that is commercially available."

Now That's Interesting
People prone to falls begin to fear falling and cut back on their everyday activities, which can make them weaker. Ironically, this increases their chances of falling. The direct medical costs in the United States for fall injuries are $31 billion annually.

To Score More Baskets, Let Physics Be Your Guide 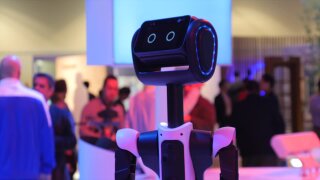