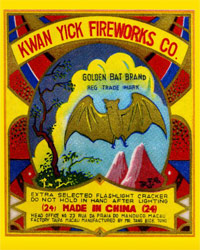 Before it enlivened firecrackers and firearms, gunpowder was thought to be an elixir of immortality.
Buyenlarge/Getty Images

Gunpowder, a mixture of saltpeter (potassium nitrate), sulfur and charcoal, has powered fireworks and firearms since the 10th century. But before its big bang as a propelling charge, it started as a substance thought to have medicinal value. The Chinese were the first to toy with the volatile powder in the 8th century B.C. Unlike their Western counterparts, who were on a quest to manufacture gold from base metals, Chinese alchemists hoped to develop an elixir of immortality. They also used gunpowder as a treatment for skin diseases and as an insecticide [source: Robinson].

There's no record of how many people died trying to extend their lives. We do know, however, that a Taoist book from A.D. 850 featured the formula for black powder and warned readers of the dangers of working with the substance [source: Robinson]. Soon after, the Chinese and Arabs were using their elixir of immortality in devices designed to increase mortality, including crude guns made from bamboo tubes reinforced with iron that used a charge of black powder to shoot arrows.