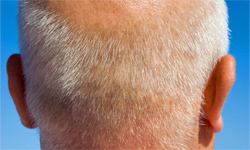 Cows the world over celebrated when John L. Norris introduced Bag Balm -- an ointment used to soothe irritated udders -- in 1899. It proved so effective that farmers began using it to heal the skin ailments of horses, pets and other domestic animals. A few used the salve -- a mixture of petrolatum, lanolin and the antiseptic 8-hydroxyquinoline sulfate -- on their chapped hands.

Over the years, Bag Balm became the duct tape of medicine. It continued to relieve tired teats and painful paws, but it also pacified squeaky springs and lubricated everything from shell casings to the chamois leather in cycling shorts. Then, a small study using Bag Balm to relieve dry skin associated with male pattern baldness showed that some men began to regrow hair where the salve was slathered. This eventually led to a new patent application for the century-old formula. In 2000, the U.S. Court of Appeals for the Federal Circuit declared that using Bag Balm to treat baldness was patentable because it's a new use of a known composition.