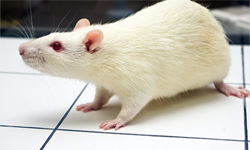 Rat poison found a second life as a therapy for blood clots, embolism and stroke.
Thinkstock

In the early 1920s, a mysterious disease caused a large number of cattle to spontaneously bleed to death. Scientists discovered that the affected animals had eaten moldy hay made from sweet clover. When the fungal cells attacked the clover stalks, they produced a powerful anticoagulant. A team of researchers at the University of Wisconsin eventually isolated the chemical, named it dicoumarol and synthesized it in large quantities. Other chemicals in the same class -- all with powerful anticoagulant properties -- soon followed. Warfarin was introduced in 1948 as a rat poison, and it saw widespread use.

It didn't take long for doctors to realize that warfarin might be helpful in patients at risk of blood clots, embolism and stroke. The U.S. Food and Drug Administration (FDA) approved the drug in 1954 for medical use in humans. Today, warfarin is the 11th most prescribed drug in the United States, although its dosing requirements and side effects make it a challenging medicine to dispense [source: Hall]. In October 2010, the FDA approved dabigatran as a replacement for warfarin, which may put the longtime blood thinner back where it started -- in the bellies of rats.