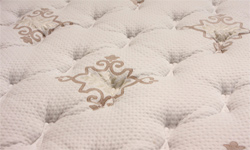 Temper Foam has found a home in space and in bedrooms around the world.
iStockphoto/Thinkstock

Ask any astronaut: When you're hurtling toward Earth in an oversized tin can, it's good to have a cushion to help protect your body. The task of developing that cushion fell to a team of aeronautical engineers led by Chiharu Kubokawa and Charles Yost. The scientists eventually invented a pressure-absorbing material, known as visco-elastic polyurethane foam, that could improve conditions for human survival in impacts generating up to 36 G's. Yost called the material "Temper Foam," alluding to its heat-sensitive nature, and began his own company, Dynamic Systems Inc. (DSI), to develop the material commercially. DSI used Temper Foam in a variety of applications, from ejection seats and wheelchair cushions to ski boots and football helmet liners.

Then, in the 1980s, NASA released its patented formula to the public domain. Many companies tried to develop commercial applications using the viscoelastic polyurethane foam, but few were successful. One company that did succeed was Fagerdala World Foams, a Swedish firm that transformed Yost's Temper Foam into the Tempur-Pedic mattress in 1991. Within three years, 50,000 Swedes were going to bed each night on a Tempur-Pedic mattress [source: Funding Universe]. In 1992, North American distribution rights went to a Lexington, Ky., businessman named Bob Trussell. Today, the company is a leading supplier of foam-based mattresses and pillows, with annual sales topping $1 billion in 2010, according to Tempur-Pedic investor relations.