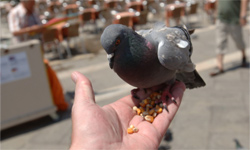 OK, pigeons aren't technically an invention, but the idea of using them to deliver messages is a fully human innovation. Genghis Khan, the great Mongol conqueror, used pigeons as messengers in the 12th century, establishing pigeon relay posts across a vast empire that stretched from China to the Black Sea. Using the birds, he was able to transmit messages and instructions more effectively than if he relied on other communications methods.

Messenger pigeons saw action in other military operations, too. In 1937, Lt. Gen. Claire Lee Chennault retired from the U.S. Army Air Corps and flew to China to prepare Chinese bomber and fighter pilots for a Japanese invasion of the mainland. Chennault's Flying Tigers weren't the only birds that took to the air. He also brought hundreds of pigeons, which carried messages during the war effort. Successors of those pigeons still play an important role in the People's Liberation Army.

Now scientists at the University of California, Irvine, are relying on messenger pigeons to collect data about California smog. Each bird receives a tiny backpack containing gas sensors, a GPS and a cell phone to transmit data. Then the researchers carry the birds 20 miles (32 kilometers) out of town and release them. As the pigeons return home, they collect smog information, which is used to generate a pollution map.