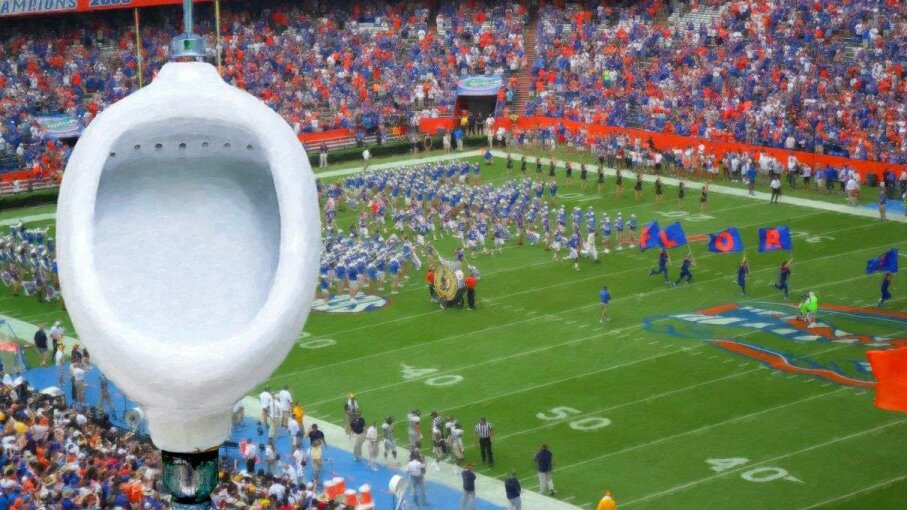 Researchers at the University of Florida calculated that nutrients from stadium-goers' urine could fertilize the field. Tortoon/Thinkstock/antciardello/Flick

Remember that time you tossed your favorite shoes after slogging around in the mud all day at that music festival? Or the time you took that really nice chair to the dump because your nephew barfed all over it? We throw valuable things away all the time because they're disgusting and we don't know what else to do with them. But one research team at the University of Florida is taking a hard look at how we deal with something that's definitely valuable, but also quintessentially gross: our pee.

As humans, we're understandably reluctant to spend a lot of time fiddling with our own waste products. After all, our body's through with it, it smells bad, and it could potentially make us sick. "OKAY, WE'RE DONE HERE," we think.

But just because we're not particularly keen on hanging out with our pee doesn't mean it couldn't save the world. Urine is full of nutrients like nitrogen, phosphorous and potassium — the same stuff we mine out of the ground and air to make the fertilizers we grow our food with."

The paradigm shift will be in recognizing that wastewater has a lot of valuable products contained within it," says University of Florida associate professor Treavor Boyer. "What we'd like to do is recover those valuable products and put them to a beneficial use."

In most parts of the world with municipal plumbing, urine gets flushed to the wastewater treatment plant, along with everything else that goes down the drain or toilet: biodegradable material, assorted cleaning chemicals, and nutrients that are great for making plants grow, but which can cause algae in rivers and lakes to explode and choke up waterways. The wastewater treatment plant removes as much of this negative stuff as possible so it doesn't pollute the environment.

"The problem is," says Boyer, "wastewater is pretty useless as a commingled stream. But if you could separate it out, you'd be able to recover drinking water, fertilizer material, energy and even metals like gold and silver."

The key to mining our waste for these treasures would be in separating the waste streams at the source. At this point, that is difficult to do in our homes, where plumbing and appliances are set up to dump dish suds and urine down the same pipe. However, Boyer's team realized it would be a lot easier at a giant football stadium where nobody's doing laundry, and a lot of people are urinating. And right around the corner from the lab, there just happens to be a football field with more than an acre of turfgrass in need of fertilization.

Affectionately known as the Swamp, the University of Florida football stadium seats 90,000 fans during seven home games each year. A thesis written by Boyer's student Bryce Zinckgraf calculated how many times each person would use the bathroom during one event, and how much nitrogen, phosphorous and potassium could be harvested from that urine. They concluded that in one football season, Gator fans would produce more than enough nutrients to fertilize the field for that season.

The University of Florida's Ben Hill Griffin Stadium has its own nickname.
Flickr/Rudi Riet

"At this point, nobody in the U.S. is capturing urine on site and saving it in storage tanks to use as fertilizer," says Boyer. The easiest way to accomplish that, he say, would be to install special waterless urinals in the men's bathrooms, which are already being used in this country as water saving devices. After that, the urine could be piped to storage tanks under the stadium and held while chemistry did its magic, changing the chemical composition of the urine into a form of nitrogen usable on grass.

Although mining our waste products for valuable nutrients may not be easy to implement overnight, Boyer says it's important to look at the costs and benefits of it, and how we might accomplish it.

"The big question is, how do we make our society more sustainable?" says Boyer.

The answer might hinge on our ability to change the way we think about our own pee.