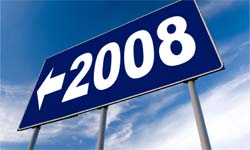 It may have started out innocently enough, but 2008 ended up packing a lot of good, bad and awe-inspiring history into just one year's time.
© iStockphoto.com/Mikhail Nekrasov

­Some years stand out in our minds, stamped into our memories by the dramatic events that unfolded during those 365 days. Maybe for you it's 1929, the year of the momentous stock market crash that kicked off the Great Depression. Or 1969, when Neil Armstrong became the first person to set foot on the moon. Or 1989, when the Berlin Wall finally came tumbling down.

The year 2008 may wind up burning just as brightly in our collective consciousness. We saw the United States elect Barack Obama, the country's first black president. We witnessed the complete unraveling of the global financial markets, and we watched food prices climb so high that eating three meals a day became a luxury that many of us couldn't afford. It was also the year in which words like "grassoline" seeped into the public lexicon and in which Google continued its bid for general world domination.

At HowStuffWorks, we're never content to watch history happen. We're bent on poking around for the reasons behind these big events. So stick with us as we answer the top 10 questions of 2008, and we'll satisfy our curiosity together.

First up, vaccines and autism.