Awesome, Abnormal & Astounding: Our Best Stories You Might Have Missed This Week

We know — keeping up with the news can be overwhelming, infuriating and sometimes disheartening. Fortunately, it's possible to stay abreast of what's going on in the world and be positively entertained. Doubtful about this claim? Keep reading to catch up on the coolest podcasts and articles we released this week.

Car company Ford has taken on the bold mission of putting babies to sleep quickly with its ultra-high-tech concept crib that mimics the hum and motion of a car. The crib isn't on the market yet — in the meantime, check out this article to learn more about it.

Sure, there might be more bumps and less relaxing on a plane than in a car, but at least you'll have amazing views. Pilot's glory, in particular, is a spectacular phenomenon, when a halo surrounds a plane's shadow in the clouds. Yes, it's as majestic as it sounds. And we've got the deets on why it happens and a supercool video here.

Ah, Bloody Mary — the stuff of horror legends. That is, the very real kind that happens after a long night of alcohol drinking. Anney and Lauren pore through the history of the beverage in a new episode of FoodStuff.

It's probably an understatement to say that mutilating corpses to keep them from coming back to life is ... strange. But it was an actual practice in a North Yorkshire town centuries ago. We can't vouch for its effectiveness, but we can give you the scoop on the preventative (or, really, paranoid) practice in this article.

Keeping with the creepy, Stuff to Blow Your Mind hosts Robert and Christian blur the lines of the fictional and the real as they explore the physical effects of imagined demons in a new episode of the podcast. Listen here.

Millions of landmines still pose a threat to people living in former conflict zones around the world. Technology to get rid of them (say, metal detectors or elephants) hasn't kept up with the technology that creates the landmines, but researchers may have a solution. Learn what new method scientists are trying to dig up the dangerous landmines here.

As science advances, more sci-fi movies are starting to seem like predictions rather than artistic musings. Add to that list "Eternal Sunshine of the Spotless Mind." Read this article to find out how researchers managed to erase a memory in a new study.

Attila the Hun's legacy is one of relentless brutality and ruthless conquest. But leaving it at that would paint an inaccurate picture of who Attila really was. Get the full story of the Hun ruler by reading this article.

Moving forward in history many centuries, Holly and Tracy discuss the times when the world stood on the precipice of nuclear war. What were these tipping points, and why did we get so close to large-scale destruction? Learn more about these close calls in a new episode of Stuff You Missed in History Class.

There's No Such Thing as a 'Learning Style' 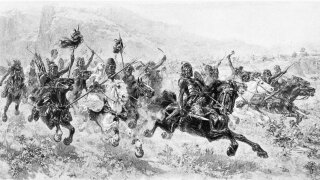 How Attila the Hun Worked