Awesome, Astounding & Atypical: Our Best Stories You Might Have Missed This Week

It's easy to get buried in the barrage of news during the week. Some of our awesome stories might have gotten lost in your media shuffle, but no worries — we've got a roundup of the best right here. Keep reading for your weekly dose of the latest and greatest podcasts and articles from HowStuffWorks.

As if the capabilities of 3-D printers weren't already impressive enough (see: 3-D printed organs and cheese), researchers at MIT have created a robot that can print the basic structure of a building. See a video of it in action in this article.

Turns out humans aren't the only animals good at devising crafty escape plans to avoid unwanted suitors. Female dragonflies nosedive and play dead to fool lecherous males into turning their attention elsewhere. Read up on the cunning habit here.

Stuff You Should Know hosts Josh and Chuck serve up some wacky fan theories on popular TV shows on a new episode of the podcast. Find out what creepy, cool and downright ridiculous speculations folks have made about their favorite programs by clicking the podcast player in this article.

Money is a great motivator — except when it comes to hearing opposing viewpoints. You couldn't pay people $10 to do that, according to a new study. Find out why people on both sides of the political spectrum were so unwilling to read differing opinions in this new article.

Sometimes, people resort to violence to achieve political revolution. One of those times was the Cato Street Conspiracy, when a group of radicals attempted to murder the British prime minister and his entire cabinet. Learn about the plot in this recent episode of Stuff You Missed in History Class.

Pollution of all sorts — light, air, water, soil — is a virulent byproduct of human existence. While one may not think of noise pollution as being the most pressing of the bunch, it can seriously hamper wildlife communication. Writer Amanda Onion digs into a new study that found noise pollution doubled sound levels in more than half of all U.S. protected areas, and even more in others, in this new article.

Considering all that aforementioned pollution makes the planet less habitable every day, people are scrambling to find ways to reverse the damage. Fortunately, one plastic-eating worm has come (unknowingly) to the rescue. Read this article to find out more about the discovery.

Aromatherapy may seem like a distinctly human activity, conjuring self-indulgent images of bubble baths and hot massages. But horses may also reap the benefits of pleasant smells. As this article explains, a whiff of lavender may be great for relieving their stress.

Atlanta's had some major infrastructure woes as of late, which could be just a matter of time and coincidence. But that's a boring explanation of the city's back-to-back highway bridge fire and sinkhole. Hosts Matt, Ben and Noel take a more conspiratorial angle, as they're wont to do, in a new episode of Stuff They Don't Want You to Know. 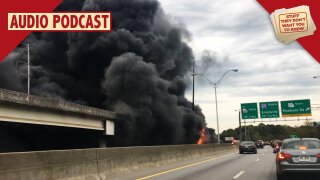 The Collapse of Atlanta