Can you build a better â¦ litter box?

by Robert Lamb
Next 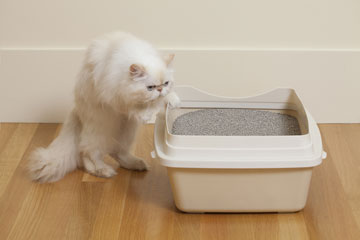 Few human achievements rank as highly as this: At some point in our species' history, we taught cats how to poop in a box. Suddenly our rugs were theoretically safe from random urinations, and our feline friends were forced to hang out indoors 24/7. Since then, we've introduced dogs and other pets to the wonders of the litter box, but that doesn't mean we've settled on a perfect design.

The concept itself is simple. We just manipulate an animal's natural tendencies so that Mr. Puffers does his business in single depository that's both easy to empty and reasonably stink-free. But as with most technologies, we can't help but continually refine and improve the idea.

So, we've rolled out turf-filled trays for dogs and filled cat boxes with everything from ashes to high-tech clumping, biodegradable and silica gel litter. Physical designs range from plastic litter tubs to self-cleaning, robotic poop palaces. Some models boast electric air purifiers, while others incorporate various ramps, mats and entranceways to cut down on litter tracks. In one of humanity's proudest moments, we've even tricked cats into using human toilets with commode-top boxes.

Yet we still wind up with tracks on the floor and an unpleasant odor wafting through the air.

What will collect the pet poop of tomorrow? Whether you have blueprints and a patent or just a doodle and a half-cocked dream, we'd love to hear it. Send your designs for a better litter box to BuildaBetter@HowStuffWorks.com with the subject line "Build a Better Litter Box." We're looking for one of the following: 1) an article with 500 words or fewer describing your proposed innovation, 2) an image gallery with 5-10 pictures of something you've actually built or 3) a detailed illustration of your excellent invention.

Hurry. You only have until July 22, 2011, to do so. After that, we're scooping out the losers and publishing our five favorite entries. Winners will receive some free swag and see their litter box innovations published on our site.

What are you waiting for? Drop those ideas in the outbox!

Send us your ideas at BuildaBetter@HowStuffWorks.com.