Can you build a better â¦ toilet? 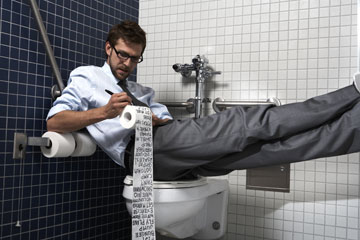 You may do your best thinking on the toilet, but you probably don't devote much of that pondering to the technology beneath your cheeks. After all, for most of us, the toilet is a place of private obligation. We don't poop because we find it entertaining. We don't pee for a good laugh. Nope, bathrooms exist because they have to, and most of us would rather not give the facilities much thought.

As a result, the Western toilet underwent relatively little innovation during the 20th century. It remained a chair with a hole in it. Oh sure, water conservation mandates forced us to develop low-flow and dual-flush toilets. Japanese designers added electronic gadgetry to provide emergency response or fart-masking ocean sounds at the push of a button. Ever at the forefront of innovation, NASA blasted a $19 million zero-gravity toilet into orbit.

Other creative toilet ideas have met with mixed success. Female urinals have yet to conquer the world's public restrooms. The waterless compost toilet has enjoyed some triumph in these environmentally minded times, but we've yet to warm up to incinerating toilets in a major way.

Some critics even charge that the Western "throne" toilet actually causes health problems. After all, we've spent millions of years evolving a body that squats to poop, with our thighs pressed into our stomach to expedite defecation. Perhaps the squat toilets of Asia are a superior design.

So, what's your big idea for the world's restrooms? How do you plan to build a better toilet? Will you learn from bathrooms half a world away? Will you draw from ideas buried in toiletry history or leverage emerging technologies to develop a faster, cleaner, prettier, safer, quieter and greener lavatory?

Whether you have blueprints and a patent or just a doodle and a half-cocked dream, we'd love to hear them.

Send your designs for a better toilet to BuildaBetter@HowStuffWorks.com with the subject line "Build a Better Toilet." We're looking for one of the following: 1) an article with 500 words or fewer describing your proposed innovation, 2) an image gallery with 5-10 pictures of something you've actually built or 3) a detailed illustration of your awesome toilet invention.

Hurry. You only have until July 22, 2011, to do so. After that, we're closing the can on your bright ideas for toilets and publishing our five favorite entries. Winners will receive some free swag and see their toilet innovations published on our site.

What are you waiting for? Start flushing those ideas out of your system. And keep them coming. We're looking to make lots of things better over the next few months, not just toilets.

Send us your ideas at BuildaBetter@HowStuffWorks.com.