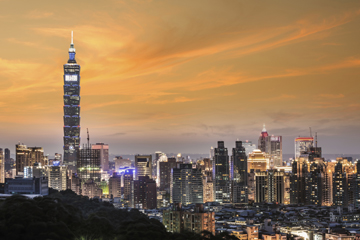 Sunset view of the Taipei 101 tower in Taiwan.
VII-photo/E+/Getty Images

Although you can't guarantee any building can withstand any earthquake – it would depend on the magnitude of the disaster – there are certainly construction practices that increase the chances that a building will survive intact. We've mentioned some of them already but there are others.

Taipei 101, a 101-story structure in Taiwan, was built near a massive fault line. It's designed to withstand not only earthquakes, but also the country's frequent typhoon-force winds. The solution? A huge internal pendulum. Inside Taipei 101, a suspended 730-ton (662-tonne) steel ball begins to swing when the building sways, neutralizing its movement [source: Tech News].

Or consider a remarkably simple idea being developed to protect residential homes against earthquake destruction. Air Danshin, a Japanese company, is testing the benefits of a home that sits atop a deflated airbag. When the airbag's sensors detect ground movement, an air compressor fills the bag and lifts the home off its foundation within a few seconds. While the concept performed well during simulated tests and is thought to be effective during a minor lateral-shaking earthquake, critics doubt the costly airbag would protect a structure during a major earthquake [source: Abrams].

Increasingly, researchers think that the blueprint for durable buildings could come from a blend of nature and science. Super-strong naturally occurring substances, such as spiderwebs or mussel fibers, could inspire the next generation of earthquake-proof buildings.

Spiderwebs are pound-for-pound sturdier than steel; plus, they can bend and stretch without snapping. The cable-like fibers of the blue mussels found along the coast of New England, for example, anchor the creatures to underwater rocks despite occasionally violent waves.

The combination of strength and flexibility in spiderwebs and mussel fibers are what engineers need for resilient buildings, too. The advent of 3-D printing, a method that sprays a material onto a surface in layers to create a three-dimensional object, could lead to the manufacturing of building materials that are firm, yet flexible -- and perfect for withstanding earthquakes [sources: Chandler, Subbaraman].

Author's Note: Will buildings ever be truly earthquake proof?

We don't get many earthquakes in the Midwest, but I've felt at least one. One summer at about 9 p.m. as I was walking through the bedroom, the wooden bed frame began to shimmy. I was just about to blame the dog for jumping into forbidden territory and causing the bed to shake, when I noticed he was still on the carpet. And looking just as surprised as I was. About the time it dawned on me that it was, indeed, a very minor earthquake, it was over. Although my experience was brief, it made an impression. And gave me a taste of the destruction that could easily occur.