Aren't there machines that can detect liquid explosives? 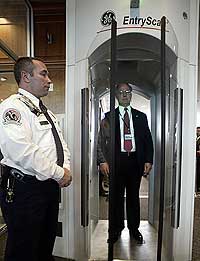 After a reportedly foiled plot in August 2006 to blow up 10 airplanes departing Britain for the United States using liquid explosives, the United States started confiscating all liquids and gels in carry-on baggage. In an announcement a month later that has frequent travelers breathing a partial sigh of relief, airports lifted the complete ban on all liquid substances. Now, each traveller is allowed to carry on as many 3-ounce containers of liquids he or she can squeeze into a quart-size plastic bag, as well as liquids purchased in the secure terminal area. While this certainly eases the burden on potentially dehydrated fliers everywhere, it also raises at least a couple of questions.

First, although the FBI has determined that the amount of liquid explosives that could fit in a quart-size bag is not enough to blow up a plane, terrorists seem to work in teams, so isn't the amount of liquid carried by each individual passenger beside the point? And second, isn't there a more high-tech way to do this?

The answer to the first question is probably a regretful, "Uh-huh." The answer to the latter question is yes. The most common explosives-detection technology currently used in airports (including more than 30 major airports in the United States) is based on detecting trace particles of bomb-making liquids and solids. When someone prepares a bomb, vapors from the explosive materials get on their skin and clothing and in their hair. One iteration of this technology is called a "puffer." GE's EntryScan gateway is a puffer device. It blows a quick blast of air all around a person walking through the scanner. Whatever comes off the person is sucked into the machine, which analyses it for trace residue from an explosive device. Another type of trace-detecting technology uses swabs to wipe carry-on baggage to check for any bomb-making residue. The swab is inserted into a machine that analyses any particles pulled off the bag. But trace detection has its limits.

The problem with this type of technology is that it can only analyze trace particles -- it can't see or analyze anything inside a sealed bottle. If someone were wearing a full protective suit while preparing a bomb or bottling liquid explosives, these machines probably wouldn't detect anything suspicious on that person. Airports need something different in order to detect liquid explosives in sealed containers. And the technology is available.

Machines that can detect contained liquid explosives are already in use in Tokyo's Narita International Airport. The Japanese government provided several of these devices to the United States in January 2006, but government officials only started trying them out in August after British officials stopped a liquid-explosive-based terror plot. While we're not sure on the make and model of the devices used in Tokyo, which are being installed in six U.S. airports for testing as of September 2006, several American companies have liquid-explosive detectors in development or ready for deployment that likely rely on similar technology.

One such device is Ahura Corporation's FirstDefender, a handheld liquid-explosives detector that costs just $30,000 and weighs about 3.5 pounds (1.6 kg). FirstDefender uses a method of analysis called Raman spectroscopy. Raman spectroscopy involves bouncing a laser beam off an object. When the laser hits the object -- whether it's a plastic bottle containing a liquid or a toiletry case holding an unknown, solid mass -- it scatters (see How Light Works to learn about the behavior of light waves). The scattered laser light bounces back to the device, where it is analyzed. Since every type of substance, explosive or otherwise, has its own unique molecular properties, it scatters light in a unique way. As of September 2006, FirstDefender can detect the scattering patterns of 2,500 substances, including all known liquid-explosive elements.

One potential problem with a laser-based device is that lasers can't penetrate opaque containers. Presumably, if a liquid explosive is contained in some sort of ceramic or metal container, FirstDefender won't be able to catch it. Some other security devices (mostly in development) that can analyze contained liquids rely on methods like radio-wave and microwave bombardment, which have their own shortcomings. There are also pieces of software that work in conjunction with X-ray machines to analyze substances pixel by pixel and alert personnel when the analysis of an object in a carry-on bag has the "pixel signature" of an explosive material.

Right now, there is no fool-proof method of detecting a contained liquid explosive, but the recently intensified focus on this area holds promise that a more sure-fire method of detection could be on the horizon.

For more information on liquid explosives, airport security and related topics, check out the following links: