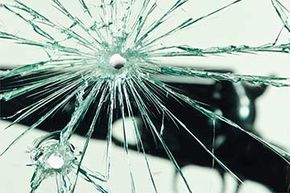 A bullet can cut through glass -- and airplanes.
Richard Goerg/Getty Images

Watch enough movies and you'll eventually encounter one where terrorists or hijackers take over an airplane and start shooting up the place willy-nilly.

There's even the flick "Air Force One," where the president, played by Harrison Ford, is shooting a gun and the terrorists are firing right back.

Is this possible or just another example of Hollywood wielding an ample poetic license? Wouldn't the plane explode or depressurize as soon as the bullet hit the skin of the airplane?

There are four things that might happen if a person were to fire a gun on an airplane:

If the bullet simply punctures the skin of an airplane, then it's no big deal. The cabin of the airplane is pressurized, and the hole creates a small leak, but the pressurization system will compensate for it. A single hole, or even a few holes like this, will have no effect.

If the bullet blows out a window, that's a problem. A big one. When the window blows, the plane will depressurize over the course of several seconds. Since all of the air in the cockpit is rushing toward the missing window, a lot of debris will be heading in that direction with it. If the person sitting next to the window isn't strapped in, then it's possible that he or she will get pushed out -- another good reason to wear your safety belt at all times! 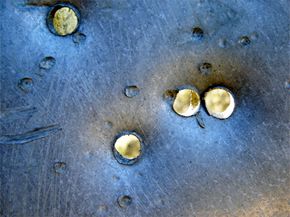 Marshall Brain "What if someone shot a gun on an airplane?" 4 December 2007.
HowStuffWorks.com. <https://science.howstuffworks.com/innovation/science-questions/gun-on-plane.htm> 17 September 2021
Print | Citation