How can quadrotors change the future of engineering? 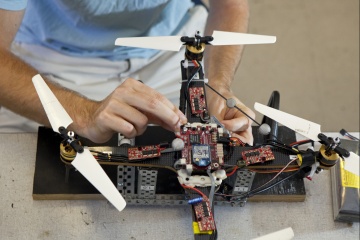 As you watch YouTube videos of teeny, flying helicopter-drones buzzing to the James Bond theme or grabbing objects with eagle-like swoops, you might think that quadrotors aren't so much changing the future of engineering, but moving swiftly to the top of a child's Christmas list.

Because although the unmanned aerial vehicles (that's UAV for kids in the know) look like robot hornets from a Tom Cruise sci-fi flick, we mostly see videos of them behaving like sophisticated, remote control airplanes. You know, the toys you primarily used to attempt a swift, midair blow to a sibling's head.

But quadrotors are being studied for far more than their uncanny routines that wouldn't be out of place in a synchronized swimming competition. Among others, the General Robotics, Automation, Sensing and Perception (GRASP) Lab at the University of Pennsylvania (and some of GRASP's graduates at KMel Robotics) is working hard to ensure serious utilization of quadrotors in future applications. Before we get into how quadrotors are changing engineering practices, let's go over what they are and how they've evolved.

You're not far off if you're picturing tiny, glorified helicopters. These little guys are autonomous machines, meaning they don't need a remote control or any human, period, telling them what to do. And some aren't so little. They come in a variety of sizes. Some can fit in the palm of your hand, some are big enough to scare the heck out of you if they're coming your way. And it's not just in robotics labs that this stuff is happening. A 2012 Kickstarter campaign by UAir reached its goal of $15,000 to build an affordable quadrotor kit ... and exceeded it, by collecting more than $220,000 in startup funds on the site [source: Kickstarter]. Keep in mind that this quadrotor is unmanned but still radio-controlled [source: UAir].

You may have noticed from the "quad" designation that these machines have four rotors (or propellers) placed on each corner. When the blades are all spinning at the same speed, the quadrotor hovers. Make a change -- even extremely slight -- in the speed of one rotor, and it can change direction. And how do these miniature little guys do it, without humans telling them?

The GRASP lab quadrotors have onboard processors and overhead motion capture cameras that tell them not just where they are, but also where they are in relation to other objects, like other quadrotors. Or walls. These cameras tell them 100 times per second where they are, and then 600 times a second their processor is telling them what to do with their rotors as they go [source: Kumar].