How do engineers stabilize buildings for rescue?

Browse the article How do engineers stabilize buildings for rescue? 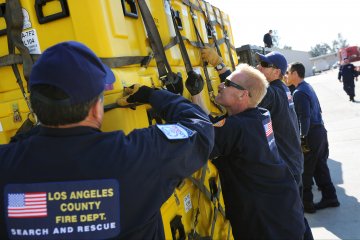 The scene of a disaster is not a place of order at first glance. Emergency personnel pour in. Bystanders -- often desperate to help – jostle with law enforcement and medical professionals for space. All the while, rescue and triage is taking place for victims.

But it's not just EMTs, firefighters and police officers competing for space. In fact, those professionals would be at serious risk if there weren't also engineers on the scene, surveying and acting quickly to mitigate damage and forestall more danger.

Engineers don't just show up with a fire crew or ambulance, of course. But they might take a class offered through an organization like the Applied Technology Council, after which their contact information would go in a database. The idea being that if a disaster struck, there's a robust and updated roster of trained professionals at the ready for municipalities.

We can't forget that disaster breeds disaster: In cases like a building collapse, there might not be a sole "event," but a series of collapses, falling debris and even the shift of wreckage after the initial activity. All those might spell serious trouble for rescue efforts and the people working on them.

In the midst of this utter chaos, what exactly is an engineer doing on the scene to make sure that no further disaster strikes? Naturally, every situation is going to be quite different when it comes to stabilizing a building for rescue. Is the building made of concrete? Wood? Light steel? Is there water damage? Erosion? Fire? Even very similar situations -- a building collapse from an earthquake or a faulty foundation, for instance -- might present quite different concerns to an engineer.

So let's dive on in, and get to the scene of our building stabilization effort. Predictably, the first thing an engineer must do when stabilizing a building for rescue is to simply size up the building. In fancy engineer speak, this is called ... the building size-up. (Come on, what'd you expect? They're engineers, not poets.)

The size-up isn't just looking at the building and saying something like, "That building looks like it's about to fall down," which is the way my size-up would go. An engineer is going to quickly attempt to assess a few main points: namely, the structural hazards, the victim location and the best way to mitigate damage. This also includes a survey of construction materials, shifting debris and even sounds from the building. (As in, don't write off that creaking, groaning sound coming from the beams as dust settling.)

If an emergency were to occur, engineers would be expected to move rapidly from each structure (something like 10 to 30 minutes per building). A green inspected tag would indicate the place has no restrictions, a yellow tag might mean that there are hazards (and restrictions would be spelled out) and a red tag would mean it's unsafe for entry or occupancy, period.

Steady as She Goes 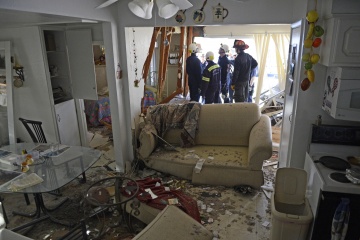 Denver's fire department works on shoring up a wall at a Denver home after an SUV crashed into the house. No one inside the home was hurt.
RJ Sangosti/The Denver Post via Getty Images

After the engineer completes the size-up, he or she has a few different ways to stabilize the damage, and they fall into two main categories: shoring, as well as strengthening and repairing techniques.

Shoring in general engineering terms means that you're temporarily supporting a structure for workers during construction, renovation or demolition. In search-and-rescue efforts, however, it's a little more specific. Shoring involves temporarily supporting a damaged structure (or at least the damaged part of the structure) that's needed for emergency activities. For instance, keeping a damaged beam stable in order to support the floor as a rescue takes place.

Vertical shores can stabilize things like floors and roofs. You might use a "double T shore" to do this, meaning that two gusseted posts brace the unstable floor above them. Lateral shores are used for walls that are either bulging out or leaning; that requires using diagonal shores to bolster the wall or angled shores to prop them up.

While shoring involves re-supporting damaged parts of the building, repairing and strengthening involves actually fixing the damage. For instance, in a concrete structure you might fix minor cracking by applying an epoxy to the cracks. If the structure is actually showing signs of collapse, however, you might need to strengthen the damaged element by placing new formwork around it and casting new concrete around the entire component. In much the same way, steel or carbon fiber jackets can be used to confine damaged beam-column joints as a way to reinforce them.

Engineers might combine different shoring and repairing and strengthening on each building, but there are some expected failures to look for depending on building types. If you're interested in the specifics, the U.S. Department of Homeland Security publishes a comprehensive field guide on building stabilization and shoring techniques.

Of course, engineers also have other tricks for stabilizing buildings. For lots more information, check out the next page.

Author's Note: How do engineers stabilize buildings for rescue?

So stabilizing buildings sounds all fine and good if you're an engineer, but what I can't get over is how quickly the process must happen. If you're in the midst of a dangerous rescue, you're no doubt doing a size-up, making decisions and carrying out those decisions in the time it takes to read this article.