Why does hydrogen peroxide foam when you put it on a cut? 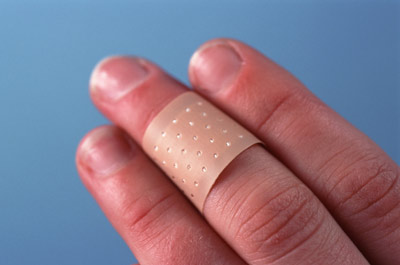 Hydrogen peroxide does not foam in the bottle or on your skin because there is no catalase to help the reaction to occur.
John Foxx/Getty Images

The reason why it foams is because blood and cells contain an enzyme called catalase. Since a cut or scrape contains both blood and damaged cells, there is lots of catalase floating around.

Catalase does this extremely efficiently -- up to 200,000 reactions per second. The bubbles you see in the foam are pure oxygen bubbles being created by the catalase. Try putting a little hydrogen peroxide on a cut potato and it will do the same thing for the same reason -- catalase in the damaged potato cells reacts with the hydrogen peroxide.

Is spinach really a good source of iron or not?
How Twinkies Work
This Bossy Desk Decides When You Stand Up and Sit Down