Super, Surprising and Strange: Our Best Stories You Might Have Missed This Week

We know, it's been a long week — all that work can be exhausting. You deserve a break! Lean back like you're cruising in a spacious land yacht, and feed your need for knowledge by catching up on our latest podcasts and articles.

How could we leave an animal known as a "water bear" off this list? Tardigrades are tiny, tough-as-nails, water-dwelling microanimals, and they're the topic of discussion in a recent episode of Stuff You Should Know.

Back on land, Scott and Ben talk about the enormous cars of the '20s-'70s, affectionately called "land yachts." Give the latest episode of CarStuff a listen here.

Sure, land yachts are awesome, beloved vehicles. But in a battle of relics of the past, ancient Dead Sea scrolls remnants take the trophy. OK, archaeologists didn't actually find new scrolls. But what they did find tells the tale of the absent writings.

Now you can have all the jewelry you want! Well, it's "jewelry ice," and it's found on the beaches of northern Japan. Close enough, right? Check out photos and a video of the crystal-clear ice in this article.

Sometimes, nature is beautiful and nonthreatening (see: Japanese ice phenomenon). Other times, it's destructive and hostile. If the U.S. wild pig population keeps growing at its current pace, the porkers will soon be trampling through most counties in the country.

You might've known that many Japanese citizens were held in internment camps in the U.S. during World War II, made possible by Executive Order 9066 that President Franklin Roosevelt signed not long after the bombing of Pearl Harbor. But the order had many more devastating effects than displacement, which Tracy and Holly detail in an in-depth, two-part episode of Stuff You Missed in History Class.

Even when it's cold outside, we still hanker for delicious ice cream. But eat the chilled dessert too quickly, and your head will remind you of your misgivings about treating yo'self. Christian gives us the skinny on the dreaded brain freeze in a new episode of BrainStuff.

In other, slightly creepier, noggin news, a new article by writer Patrick J. Kiger describes research that proves people can be identified by their brain activity. That means "brainprints" could be the new passwords or fingerprint scans sometime soon.

But some whales are facing a more pressing problem than password protection: strandings. Researchers are now building on prior evidence that beachings are tied to solar flares. Turns out the radiation may interfere with Earth's magnetic fields, disrupting the whales' navigational senses and disorienting them.

Is it Ever Legal to Punch Someone in the Face? Oh Yeah

No Link Between Immigrants and Crime

Brainwaves and 'Emotional ID' Could Replace Passwords and PINs 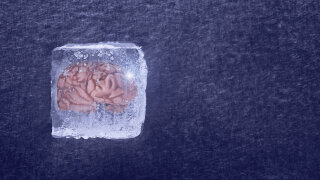 Why Do We Get Brain Freeze?