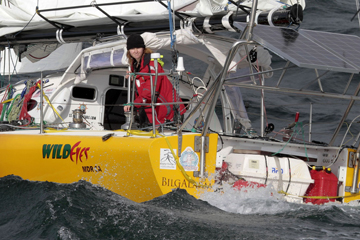 Abby Sunderland on her yacht in South Africa in 2010, as part of her bid to be the youngest person to sail solo around the world. A few weeks later, she was rescued after her boat got damaged in the Indian Ocean. Technology helped save her life.
Jaco Marais/Gallo Images/Getty Images

In the waning days of 2009, Dennis Clements was a long way from home. The Missourian had traded the Midwest's cold winters for a small island near the eastern bounds of Puerto Rico.

Or at least, that's what he thought.

Clements' 34-foot (10-meter) sailboat became stranded in the North Atlantic Ocean long before he reached his island destination. For four days, gale-force winds pushed the boat -- and its captain -- to the limit, nearly drowning them both on Dec. 26.

In one swift move, winds and waves capsized the boat and dumped Clements into the icy water. He watched as the boat popped back up, righted itself, caught air in its sails and moved impossibly out of reach.

Clements was sure he was a dead man.

Then a decision he'd made four years earlier saved his life. Clements had purchased an Emergency Position Indicating Radio Beacon (EPIRB) and affixed it to his sailboat. When the boat became waterlogged, the beacon began to transmit a distress signal to weather satellites operated by the National Oceanic and Atmospheric Administration (NOAA). These satellites, outfitted with NASA-developed repeaters, relayed the distress signal back to NOAA ground control where it was put in the hands of the Search and Rescue Satellite-Aided Tracking (SARSAT) program, which determined the distress signal's location and relayed the information to the U.S. Coast Guard.

While Clements believed he was experiencing his last moments on Earth, his rescue was already underway. The U.S.S. Dwight D. Eisenhower was the only rescue-capable vessel within 100 miles (161 kilometers) of Clements and immediately dispatched a helicopter and crew. Within four minutes of finding Clements, the Navy seaman aboard had rescued him [source: NASA].

The technology that made Clements' rescue possible relied on low-orbiting weather satellites that could ping a signal back to the responder on a boat. Although this technology can produce obvious results -- namely, the rescue of a person in distress -- it still has room for improvement. Advanced search and rescue technology trades time-consuming and general distress coordinates for immediate, precise data. And it works on land, in air or at sea, in urban or rural areas, and in the wake of earthquakes or tsunamis.