by Maria Trimarchi
Prev NEXT
9 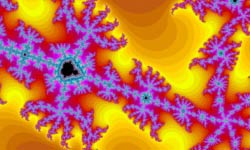 The Mandelbrot set is the most famous of the fractals, and is often used to create computer-generated fractal art.
Thinkstock/Hemera

There are two things you should know about Benoit B. Mandelbrot. One: Mandelbrot is the father of fractal geometry. And two: The "B" as his middle initial doesn't actually stand for anything, and was added by Mandelbrot himself.

Fractal geometry is based on Mandelbrot's idea that the world around us is not smooth, but that there are uneven and irregular shapes with rough, fragmented edges, and no matter how much you magnify those shapes, they continue to look uneven, irregular, rough and fragmented -- but a smaller version of the same pattern is repeated time and again each time you zoom a little closer. Fractal mathematics is the tool used to tease out those patterns.

Mandelbrot coined the word "fractal" to describe irregular and fragmented mathematical shapes similar to those found in nature (such as a cloud or a coastline). The Mandelbrot set (and this is true of every fractal) is actually a mathematical set (a collection of numbers). But if fractals are a collection of numbers, how is it that most of us are familiar with fractals as images? Mandelbrot created the first images of these mathematical sets by plotting thousands of points on a complex number plane with the help of a computer in 1978 while he worked as a mathematician at the IBM Thomas J. Watson Research Center, and these images were officially named after him in the 1980s.