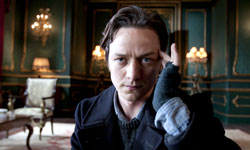 Comic book telepath Charles Xavier (James McAvoy) gets all up in your mind with his psychic powers. Is this no longer fantasy?
Murray Close/Getty Images

What if someone could peek inside your mind and see what you're thinking? We've all thought about it before: the wonders of telepathic communication and the horrors of watching the last bastion of human privacy being eroded. Neuroscientists have forecast the realization of this dream/nightmare for decades, and now we're closer than ever to breaching the fortress of the human mind.

On Sept. 22, 2011, the journal "Current Biology" published a University of California, Berkeley, study in which scientists analyzed brain activity to gain a blurry but accurate insight into the human visual experience. They showed test subjects YouTube clips as they scanned the subjects' brains with a functional magnetic resonance imaging (fMRI) machine. These devices measure the flow of blood in the brain, which corresponds with neural activity. The scientists were able to take the resulting fMRI data, decode it in a computer model and assemble a visual interpretation of the random movies the subjects next watched.

The researchers hope to use this development to improve our understanding of how the brain works, as well as the link between reality and the mind.

Explore the links below to learn even more about what happened in 2011.