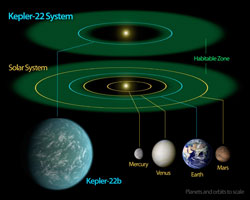 This NASA diagram compares our own solar system to Kepler-22, a star system containing Kepler-22b.
Ames/JPL-Caltech/NASA via Getty Images

You're familiar with Goldilocks and the three bears, right? One bowl of porridge was too hot to eat, one was too cold but a third bowl was just right. Astrobiologists and planetary scientists have a particular fondness for this tale, as it underlines the Goldilocks principle, which states that habitable planets must exist within a certain orbit in order to potentially sustain life.

For the most part, NASA's quest to chart observable exoplanets has played out like Goldilock's adventures in the house of the three bears. Only instead of encountering two bowls of unacceptable porridge, NASA has cataloged hundreds. The agency has found systems where Earth-like planets burn in the fires of a close orbit or drift frozen in distant exile. If liquid water can't exist there, it's a no-go for this thing called life. Some suns are too old and large, others too weak. Scientists have even discovered rogue planets that drift like masterless samurai through the Milky Way.

But 2011 was the year NASA finally found a bowl of reasonable planetary porridge. On Dec. 5, NASA announced that its Kepler mission had discovered Kepler-22b, the first discovered planet in the habitable zone of a star similar to our sun. At 2.4 times the radius of Earth, this small exoplanet resides 600 light-years away from us. Keppler-22b's actual contents remain a mystery for the time being, but the exoplanet puts NASA one step closer to finding another world that feels like home.

The Kepler mission hunts for exoplanets by analyzing the brightness dip in stars when planets cross their path. In 2011, the mission also unearthed Kepler-16b, which orbits two stars, and Kepler-10b, the smallest planet ever discovered outside our own solar neighborhood.