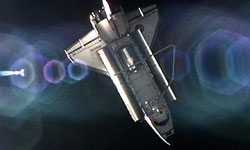 The space shuttle Atlantis begins a scan of its thermal protection system after undocking from the International Space Station for its trip home on July 19, 2011.
NASA/Getty Images

When it comes to the history of space exploration, 2011 will forever be remembered as the year NASA's space shuttle program ended after three decades. What began on April 12, 1981, with the launch of Columbia, ended on July 21 as Atlantis touched down at Florida's Kennedy Space Center.

The final space shuttle mission stirred a great deal of nostalgia among both space enthusiasts and the mainstream public, but it also raised concerns about the future of manned space exploration. Amid tightening budgets, NASA scrapped plans to return to the moon and canceled the Constellation Program to develop the space shuttle's successor.

The Space Launch System is in the works, but don't expect to see any actual manned U.S. spacecraft until at least 2019 [source: Boyle]. Until then, NASA's human space exploration will have to depend on chartered flights from the Russian Federal Space Agency and private spaceflight companies such as Virgin Galactic.