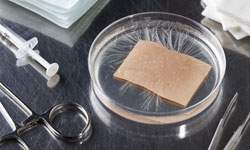 Imagine a future in which doctors develop replacement body parts by growing the patient's own stem cells over a polymer scaffolding. Amazingly enough, that future is now. In fact, Stockholm-based surgeon Paolo Macchiarini performed the feat twice in 2011.

Macchiarini had previously made the headlines by performing a similar procedure in 2008, except in that case he grew the transplant recipient's cells over a ghost trachea, a donor trachea chemically stripped of its cells. This time around, however, he used a synthetic polymer scaffold -- a windpipe-shaped framework for the patient's stem cells to grow over. Macchiarini implanted the first of these artificial tracheas in a 12-hour procedure in June and a second one in November. Both surgeries were successful.

Not only does this tissue-engineering technology remove the necessity for donor tissues, but it also saves the recipient a lifetime's worth of medications to suppress the immune system and prevent transplant rejection. After all, the organ consists of the patient's own cells. In the future, scientists hope to grow even more complex organs, ushering in a new age of regenerative medicine.