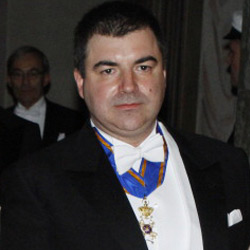 That's Konstantin Novoselov. He's all dressed up to claim his 2010 Nobel Prize for his adventures in science. You'll get to know him better in a few pages.
Patrik Osterberg/Getty Images

In the award-winning movie "Amadeus," Antonio Salieri labored in the shadow of his rival, the absurdly talented Wolfgang Amadeus Mozart. Salieri was a competent, seasoned composer, but his work never achieved the recognition or acclaim of Mozart's. The scientific world has similar personalities. Mozart might be compared to the Galileos, Darwins and Einsteins of the world; Salieri to all of the other scientists who push their fields forward, if not in anonymity, then at least without fame.

In our own way, we're trying to remedy that situation. On the following pages, you'll meet 10 actively working scientists whose research continues to shine a light into the shadowy corners of our mysterious universe. Some have walked away with Nobel Prizes, while others have basked in much smaller spotlights on much smaller stages. All are forward thinkers with the vision and drive to change the world and, perhaps, to become the next Amadeus of the scientific community.