Kepler, the Telescope Not the Man 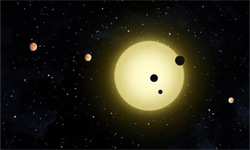 The spacecraft used in NASA's Kepler mission isn't a person, but since it's named after one of the great minds in the history of science -- Johannes Kepler -- it seemed fair to include it (him) in the list, especially considering the magnitude of the mission's discoveries.

First, the facts: Kepler is a space telescope launched by NASA in March 2009 with the goal of surveying 170,000 stars in a small patch of sky near the constellations Cygnus and Lyra. Its quarry aren't the stars themselves, but the exoplanets that might be orbiting them and that might have conditions capable of supporting life. Kepler finds these planets when they cross the face of their parent star.

Now, the amazing results: Kepler has found a spectacular array of planets. In just a few months, it has discovered more than twice the number of exoplanets spotted from Earth in the last 15 years. More than 400 of these worlds exist in solar systems containing a number of bodies revolving around strange, faraway stars. What are some of these worlds like? Kepler-16b is a Saturn-sized planet orbiting two stars, a la Luke Skywalker's home Tatooine. The Kepler-11 system consists of six planets -- some rocky and some gas giants -- orbiting a single, sunlike star. In all, Kepler had identified more than 1,200 candidate planets awaiting confirmation and further study, as of January 2012.

The Kepler mission is scheduled to make observations through the end of 2012, but its design will support an additional three years of investigation. NASA officials, faced with extreme budget cuts, are now trying to decide if the program should be granted an extension or terminated. Given its success, one can only hope that Kepler -- the telescope, not the man -- is allowed to live on.