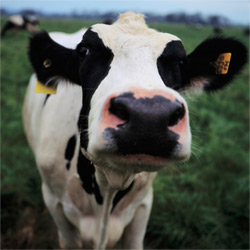 That's not Katey Walter Anthony. It is, however, a cow, another significant source of methane, which Walter Anthony studies.
Jerry Dodrill/Getty Images

As a biogeochemist stationed at the University of Alaska in Fairbanks, Katey Walter Anthony studies one of the most understood compounds in chemistry -- CH4, or methane. Unfortunately, the impact of methane on global warming is far less evident, which is why Walter Anthony regularly treks to Siberia, near the North Pole, to study a type of soil known as permafrost, the soil that remains at or below the freezing point of water for years and years.

But the "perma-" isn't permanent. In fact, the frozen soil can melt, forming first a sinkhole, then a small lake, then a large lake. As our planet warms, more of these bodies of water will form. In and of itself, that's not so bad, but these permafrost lakes produce something else -- methane gas, a byproduct of microbial decomposition that bubbles from the lake bed to the surface. At the surface, it bursts into the atmosphere and, like carbon dioxide, becomes part of the gassy blanket warming our planet up.

Walter Anthony has been collecting methane from Arctic lakes for years and worries that Earth may be on course to experience an unprecedented warming. Her estimates suggest that, by 2100, melting permafrost could increase levels of atmospheric methane by as much as 40 percent beyond what would be produced by all other sources [source: Walter Anthony]. Because methane is even more potent than carbon dioxide as a greenhouse gas, it could potentially raise Earth's mean annual temperature an additional 0.32 degrees Celsius [source: Walter Anthony]. This could accelerate global warming to drastic levels and wreak havoc with weather patterns and sea levels.