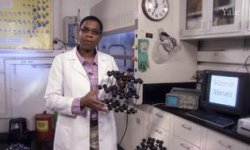 Watch the video to find out why scientists think graphene is one of the coolest materials around.
Yale

When you think of cutting-edge research, you often think of sophisticated labs stuffed with multibillion-dollar equipment. But arguably one of the biggest discoveries in the last decade of physics and materials science came on the back of a small piece of invisible tape -- the same kind you use every day in your home or office. The brainchild behind the discovery was University of Manchester researcher Konstantin Novoselov, and the novel material he plucked from the sticky tape was graphene.

Graphene comes from graphite, the form of carbon that makes up the tip of your No. 2 pencil. Scientists have known graphite's structure for years -- it consists of carbon-atom sheets stacked on top of each other -- but they were never able to separate the black, crumbly substance into its individual layers. Then, in 2004, Novoselov (perhaps stuck on some tedious conference call) placed a small crumb of graphite on the business side of a piece of a tape. Next, he folded the tape over the crumb and peeled it back to reveal an even smaller piece of graphite. He repeated this process several times until, finally, he had graphene -- a single layer of carbon atoms, arranged in a flat plane of interconnected hexagons.

After isolating graphene, Novoselov was able to begin testing the material's properties. He and other scientists discovered that a monolayer of carbon atoms conducts electricity faster at room temperature than any other substance (hello, faster computers!). In 2010, Novoselov received a Nobel Prize in physics for his groundbreaking research. Now he's working to turn graphene into useful products, such as ultrahigh-speed transistors, that could revolutionize the electronics industry.