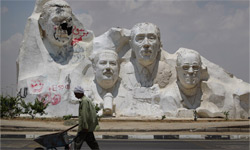 The word chemistry comes from ancient Egypt -- Khem described the soil's changing colors when the Nile flooded -- so it seems strangely satisfying that one of the world's most significant chemists is Egyptian by birth. Ahmed Zewail was born in Damanhur, Egypt, in 1946 and received his bachelor's and master's degrees from Alexandria University before moving to the United States to pursue his Ph.D. Fast-forward a few decades and you'd find Zewail as the Linus Pauling Chair professor of chemistry and professor of physics at the California Institute of Technology. He's also a Nobel laureate, picking up the 1999 award in chemistry for his groundbreaking work using lasers to study chemical reactions.

Here's why that work is important: Most chemical reactions occur in the smallest fractions of a second. Transition states -- intermediate molecules or atoms that are neither the reactants nor the products -- exist for only 10 to 100 femtoseconds (a femtosecond is equal to 10-15 seconds or 0.000000000000001 seconds). Zewail developed a technique whereby ultrashort laser pulses froze these transition states and made it possible to observe them clearly. For the first time, chemists could witness molecules split apart, move and recombine.

His pioneering work in femtosecond spectroscopy would be enough to earn him a spot on our list, but his lasting contributions are just as likely to come from his ongoing efforts to revitalize science education in the Middle East. After the revolts of the Arab Spring, Zewail returned to his homeland to discuss how the region might cultivate the next generation of scientists. In May 2011, the new government unanimously approved a research center called the Zewail City of Science and Technology, which hopes to attract the brightest Middle Eastern minds and return the country to its glory as the seat of scientific innovation.