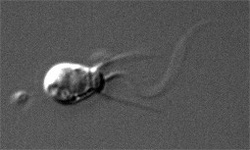 You're looking at a single Salpingoeca rosetta cell. S. rosetta is a type of choanoflagellate, tiny organisms that are handy for figuring out how animals evolved.
Image courtesy Creative Commons/Mark J Dayel (King Lab) 2008

You know how certain physicists and cosmologists are fixated on trying to unravel what took place in the first few moments after the big bang? Biologists have a similarly mysterious moment they like to obsess over: the rise of multicellular animals from unicellular progenitors. One scientist trying to piece together that enigmatic puzzle is Nicole King, an associate professor of genetics, genomics and development at the University of California, Berkeley.

King's research focuses on choanoflagellates, single-celled protists found in both freshwater and saltwater environments, that may be the missing link between unicellular organisms and animals. One clue to this link is the resemblance of choanoflagellates to the collar cells of sponges, the simplest of animals. Another clue is the ability of choanoflagellates to organize themselves into colonies, much as an early animal might have done. But the most telling clue, revealed by King's investigations, is the presence of two genes previously believed to exist only in animals. Those genes code for adhesion molecules and receptor tyrosine kinases, responsible for maintaining the physical integrity of tissues and for intercellular communication, respectively.

Now King's lab is sequencing the genomes of several choanoflagellates to test whether genes required for animal development evolved before multicellular animals themselves. The answers she finds may reveal how and when Earth's primordial soup began to fill up with tastier, more complex morsels.