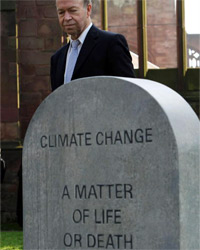 Today, global warming is old news, but back in the 1980s, when NASA climatologist and Columbia University researcher James Hansen began warning the public and politicians about the threat of greenhouse gases, the concept was relatively new. Hansen stayed on the case to make sure the science -- and the side effects -- of global warming were known to as wide an audience as possible. One person in that audience was Al Gore, who turned to Hansen for advice, consultation and information. The product of that partnership was "An Inconvenient Truth," a slide show, film and book that introduced the concepts of climate change to millions of people and, in many ways, encouraged the world to "go green."

Hansen continues the drumbeat today. In 2009, he published "Storms of My Grandchildren," a searing look at how human-caused climate change could destroy the planet as we know it today. The book has won awards and stirred controversy, but its major contribution is that, just like Al Gore's work, it has reinforced the key concepts of global warming to a worldwide audience. In fact, New Scientist editor Michael Le Page said this about the 2009 book: "This is not the best-written science book ever, nor the easiest to understand. But it could be the most important one you'll ever read." Hansen regularly updates the facts of the book on the Web, so you can stay current, if you're so inclined, with the ongoing debate surrounding one of the most significant issues humans will face in the near future.