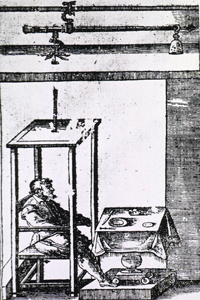 A 17th-century illustration of Santorio in his famous weighing chair device on which he virtually lived for 30 years.
Courtesy U.S. National Library of Medicine/Images from the History of Medicine

This 16th-century Italian nobleman with a name so nice they used it twice was a literal Renaissance man. Santorio both lived in Renaissance Padua, Italy and divided his interest among a number of pursuits, including physiology. Santorio wondered if what we ingest in the form of food and drink was equal to the amount we expel in the form of feces and urine. A dedicated scientist, Santorio decided he would spend 30 years carrying out a daily experiment to weigh himself, as well as what he ate and what he expelled, and tally up the difference.

To carry out his experiment, Santorio constructed a weighing chair, a four-poster bench dangling from a beam that weighed him and his food and expulsions. Santorio spent almost all his time working, eating, expelling, sleeping and, most importantly, weighing during the course of this 30-year experiment. He found his suspicions were correct: What we ingest weighs more than what we expel, but that difference can't fully be accounted for by the weight we put on by eating and drinking. This led Santorio to his theory of insensible perspiration, or the idea that we expel waste constantly from our skin. While it was groundbreaking, it had no practical application. But Santorio's work led to the study of metabolism, a breakthrough in our understanding of life [source: Minkel].