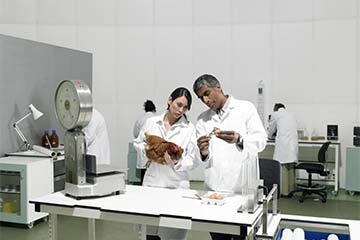 Scientists experiment on a chicken in a lab.
Michael Blann/Getty Images

It sounds like a joke, but it's absolutely true -- medical, scientific and academic ethics prohibit professionals from engaging humans in potentially harmful experiments. One can imagine scientists -- flush from the excitement of creating a new hypothesis to test -- frowning when they receive a shipment of rats or mice to tinker with instead of an affable guy named Ted. Since we're trying to figure out what makes Ted tick (or makes Ted's ticker stop ticking), why not cut out the middle mouse?

One of the reasons that scientists experiment on non-human animals is pretty simple: Testing on certain creatures works really, really well. In many ways, they're really much easier to test on. Take mice: They breed fast, they're small and don't take up a lot of room, and scientists can manipulate their genes (by either adding foreign DNA or inactivating genes) to study disease or modifications across a population.

This is exactly the kind of thing that humans are not so hot for. We can't easily manipulate human DNA for research purposes. Even if we could, there's general agreement that it would be highly unethical.

There's also the point that many animals have organ function that is extremely similar to our own. While you wouldn't think that a mouse would be invited to your next family reunion, their genes are more than 90 percent similar to your own genetic makeup [source: European Commission].

Now while most of us immediately think of rats and mice when we imagine animal testing, there are many excellent models that are not mammals. Let's not just assume that "animal testing" applies to the usual furry suspects. Roundworms, for instance, have 302 neurons, and scientists know exactly where they are -- much easier for experimentation than a human, with our trillion neurons that have yet to be mapped [source: O'Malley]. Even something as foreign to us as a zebrafish is a terrific subject for scientists. Because the fish have transparent embryos that develop outside the mother's body, they're a great resource for understanding development of vertebrates in general [source: Institute of Neuroscience].

Author's Note: Why do we experiment on animals?

When I say it's "less ethically risky" to conduct testing and experimentation on animals, I understand it's a loaded phrase. Animal testing is inherently controversial -- second only, perhaps, to human experimentation.

How are Crayons and markers made?
How Steak Works
How Hollywood Screen Siren Hedy Lamarr Helped Pioneer WiFi and GPS