Browse the article Why do we experiment on guinea pigs? 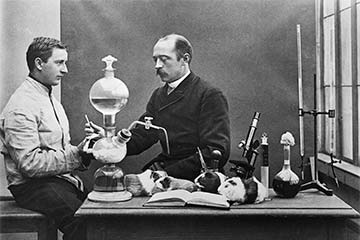 German physiologist Emil von Behring, who won the 1901 Nobel Prize for his work with tetanus and diphtheria immunizations, is shown in his lab with an assistant and some anxious-looking guinea pigs.
© Bettmann/CORBIS

You can credit George Bernard Shaw for the phrase "human guinea pig" as an invective against experiments with vaccination. The truth is, calling someone a guinea pig probably isn't doing the idea justice. About 86,000 rats and mice are used a year in research, while the twitchy-nosed guinea pig has only 1,300 mentions [source: Engber]. The decline in the use of guinea pigs for lab research coincided with the rise of rats and mice bred for use in this area. So why does the term "guinea pig" evoke poking and prodding for science, while mentioning a mouse only leads us to jump on the couch?

Guinea pigs were actually bred for eating; that means that they're docile and domesticated and don't mind being caged. That's helpful for researchers who need to work with an animal that isn't at risk of launching an attack or just generally going batty from tight quarters. Unfortunately for the guinea pig (and the guinea pig's story is full of unfortunate circumstances), it's also quite vulnerable to disease. While this was not exactly welcome news to the guinea pig community, that was used to discover the bacterial cause of tuberculosis, it's great for the scientists finding ways to keep us humans healthy [source: AnimalResearch.info].

Guinea pigs have a few other characteristics that make them quite useful in studies of human health. Next time you're struggling with what to talk about on a first date, perhaps mention to your new friend that guinea pigs are susceptible to anaphylactic shock -- thus, they've helped science understand the process of extreme allergic reactions a bit more. The airways of guinea pigs are sensitive to allergens, so they're a good resource for asthma research and testing, as well [source: AnimalResearch.info].

They're also used in nutritional research. Their most famous contribution came when vitamin C was discovered through research on the rodents; guinea pigs, like humans, don't produce the vitamin naturally and must get it from another source [source: Adam]. In other words, guinea pigs are responsible for ridding the world of scurvy pirates. Arrgh!

Want to hear something really cool? Guinea pigs' ears are not that different from our own, and they're often used to study auditory systems [source: AnimalResearch.info]. In fact, scientists were first able to regrow cochlear hair cells in guinea pigs, which is a pretty big deal -- cochlear hairs send electrical signals to the brain to help us hear. We previously thought that once destroyed, there was no turning back; lack of cochlear hair would lead to deafness [source: Travis]. But with the help of our little guinea pig friends, scientists were able to take a first step to discovering a way to prevent hearing loss as we age.