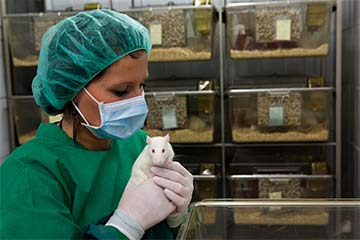 A female lab assistant takes care of a rat. Do women have better rapport with lab animals?
annedde/Getty Images

This is a little different from the topic at hand, but the idea is pretty much the same: Do lab animals actually find some people more calming, while others cause them stress or fear? Scientists -- who have some stake in the issue -- have released a study that shows that the scent of men seems to cause anxiety and numb the sense of pain in mice, while the scent of women gives them a relative sense of calm [source: Sorge].

I know what you're thinking: If men have the superpower to numb pain in mice, than why are the headlines talking about how mice fear men? Shouldn't we be concerned that mice don't feel pain around men? Fortunately for those who don't want mice to take over the earth, this response is not uncommon for animals as a fear response. Called stress-induced analgesia, it allows animals to put all their energy into getting out of danger without being distracted by pain [source: Owen]. It's a great measure of how scared or stressed a mouse is, and can be used to test fear responses.

The study came about when a few scientists in a lab that specializes in sex differences noticed that some mice weren't displaying normal pain responses. So they tested the mice's stress response while men were physically present in the room, and then when only their worn T-shirts were in the lab. Both experiments resulted in the mice showing signs of stress: They displayed stress-induced analgesia, pooped more, recorded a higher temperature and showed outward signs of fear. (Which are measured using the fabulously named Mouse Grimace Scale [source: Owen].)

The study found that a mix of three pheromones in male armpit sweat (which could be smelled both in person and on the T-shirt) was causing the response, and that it was due to the mouse feeling a threat from an isolated male. Female researchers and their T-shirts? They seemed to have no effect on the mice -- but they did seem to calm them when paired with a male or male-worn shirt [source: Owen].

So it's not entirely true that lab animals are calmer around women, but one study certainly shows they have a greater fear response around men. However -- as any female researcher who's been bitten by a mouse can tell you -- let's hold off before we call it a universal truth.