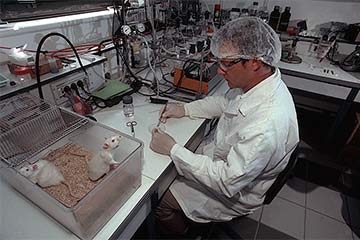 The typical white lab rat is actually an albino version of the Norway or brown rat.
BSIP/UIG Via Getty Images

Say you're a scientist in need of a testing subject. For various reasons, you've decided to go with rats as your animal of choice. After all, they're easy to feed and house, and some people claim that rats form closer bonds with humans, which might lead to more docile behavior [source: Perret-Gentil]. (The latter is probably not the best rationale for choosing a lab animal, but whatever. You're the scientist.)

But rat-napping is not in a researcher's job description. So rather than lurking in an alley with a burlap sack, scientists and researchers -- in possession of a good hypothesis and in want of a rat -- do what you and I do when in need of a date: go online.

And unlike most of us, scientists have the luxury of being quite picky. Rats are bred specifically for laboratory and testing purposes, and certain strains are more desirable for different experiments.

All laboratory rats are part of the same species: the Norway, or brown, rat. (And no, that doesn't mean they're all brown.) The word "strain" refers to a group of rats with a common ancestor. Many rats used in research and science are part of highly inbred strains, so that all the animals are extremely similar to each other genetically, reducing variability [source: RatBehavior.org]. Several of these strains are highly popular in labs; the Sprague-Dawley, Wistar and Fisher rats are all used often in research. Beyond these basic strains, sub-strains are bred that might have specific genetic differences. Zucker rats are a sub-strain of Wistar that are prone to obesity and diabetes, which make them ideal for research on those disorders [source: Charles River].

Which does lead us to the fact that inbred rats aren't always desirable. While they do have genetic uniformity, they might also have some genetic traits that aren't applicable to general populations of rats. Outbred rats might more closely mimic a human population, which can be useful further along in research [source: Foley].

So the next time you're looking for a desirable test subject to run your maze, remember that not any old rat will do.

Author's Note: Are lab rats bred just for the lab?

Searching for the scientist's equivalent to OKCupid? Take a look at one such laboratory rat-shopping emporium to get an idea of how researchers find and purchase their subjects. .