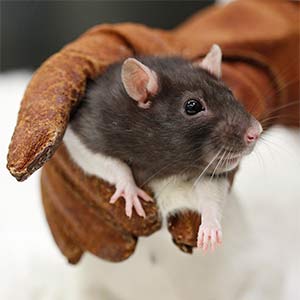 Lab rats have been bred to be extremely similar genetically, which means that they're also predisposed to the same genetic susceptibilities -- like cancer.
Agency-Animal-Picture/Getty Images

In 2012, a controversy erupted when a study claimed that rats fed genetically modified corn developed tumors. The study was eventually retracted for several reasons, including inconclusive results [source: Séralini]. (It was republished in 2014 after peer review [source: Tickell].) Critics of the study might have surprised the general public with one other assertion: that the rats used in the research were already prone to developing cancer.

Most of us assume that all lab rats are the same, but there are several different strains of common lab rats. Most lab rats have been bred to the point of near-uniformity within their strains -- a helpful trait when doing controlled experiments and studies. (In fact, the ubiquitous white rat that conjures lab coats and mazes is a common brown rat simply bred as an albino.) Each strain is designed to have slight genetic differences from the other rats, but extremely similar genetics within the strain itself [source: PetMD]. This is to create controlled, systematic results between animal subjects.

So, cool. There are lots of different rats. But what does any of this have to do with cancer?

Well, it turns out that rats, in general, are susceptible to tumors and cancer [source: Ducummon]. Female rats are especially prone to developing mammary tumors; spaying a female pet rat dramatically reduces the risk of mammary tumors, as it takes away a large source of estrogen [source: RatBehavior.org].

As we said, lab rats have been bred to be extremely genetically similar. And that means that they're also predisposed to the same genetic conditions -- like cancer susceptibility. So beyond the "regular" high occurrence of benign and malignant tumors in rats, the laboratory strains are probably going to have even higher rates of cancer incidence -- they're just not as genetically varied as pet rats who've been allowed to explore OKCupid or, more likely, had a descendant who met a special someone from another alley [source: Ducummon].

In the infamous study where the genetic predisposition for cancer was called out, researchers were using the Sprague-Dawley strain of laboratory rat. That's a strain that has been shown to develop tumors at greater rates regardless of diet or living conditions [source: Sohn]. So yes, some laboratory rats are more prone to cancer. But remember that most rats, lab or not, are at risk for developing tumors.

OK, big confession. When I was merely a child, I thought it would be -- cool? Different? An excellent way to practice my Crispin Glover impression? -- to have a pet rat. Velvet was one of the unlikely rats that succumbed to a tumor, but I will say this: She was a thousand times better as a pet than the frogs we got a year later, which insisted on eating only live crickets we caught ourselves every night.

Why Do We Experiment on Mice?
Hand Sanitizer Is Great at Preserving Insect DNA
Hear and Now: Cats Dig Food Puzzles