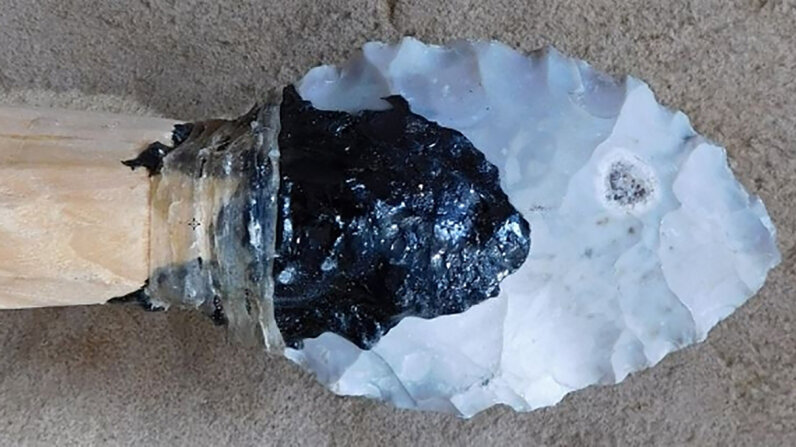 There are some things people can't live without, so we invented them way before we ever invented writing: coats, knives, roofs, fire, just to name a few. Turns out, another thing our prehistoric precursors needed that we still need today is the ability to stick one thing to another thing, and have them stay that way. Which is why Neanderthals had glue: They might have been cavemen, but they weren't savages.

Homo neanderthalensis used their glue — a viscous tar distilled from birch bark — to fix weapons or the heads of a tool onto the haft, or handle. And Neanderthals were actually the leaders in glue technology, beating us Homo sapiens to the punch by more than 100,000 years. They began brewing tar 200,000 years ago, whereas the earliest evidence of modern humans using tree resin as adhesive appears less than 100,000 years ago.

Research published in 2011 shows that Neanderthals had the ability to create and control fire. So does the fact Neanderthals could manipulate fire to produce tar prove they weren't as dimwitted as we like to assume? Scientists have been curious about the process Neanderthals used to make their glue. A new study published in the journal Nature Scientific Reports suggests three different ways Neanderthal tar could have been manufactured. After all, it had to be produced — this stuff wasn't just secreted from trees growing in the forest. But how difficult was making tar, really?

Tar-making is definitely a process, no matter which way you go about it — the research team figured that out through a fancy bit of experimental archaeology. They devised three different potential methods of extracting sticky stuff from birch bark: the "ash mound" method (tightly rolled layers of birch bark are covered in ash and embers); the "pit roll/cigar roll" method (one end of a birch roll is lit, and placed burning side down into a small collection pit) and the "raised structure" method (a birch bark container was placed in a pit beneath an organic mesh, which holds loosely rolled bark that is then covered with earth and fire).

After recreating the three tar production methods, the scientists assessed each according to three criteria: the yield (tar produced compared to resources and time spent); temperature (the degree of temperature control required); and complexity (the number of individual components needed, and steps in the process).

The team found that though the simplest, fastest method — the ash mound method — yielded just a pea-sized amount of tar, the most complicated, time-consuming method — the raised structure method — produced 15-20 times more, and was also the most efficient. They also observed that regulating the temperature of the fire didn't make much of a difference to the product.

Even though they have no evidence that the Neanderthal way of making tar was similar to any of their experimental methods, making the connection between the birch bark, the fire, and the tar would have required that Neanderthals possess a proclivity for abstract thought. So whether they were making easy, inefficient tar instead of something like the high-yield method requiring a folded cup and little grill made of sticks, Neanderthals had something going for them — they were seriously using their noodles! And who knows, it's possible they started with a method similar to one, and moved onto another over time.

Now That's Interesting
Neanderthal genes make up about 2 percent of modern human DNA, influencing a wide variety of traits, from height to whether a person contracts lupus in their lifetime. However, a recent study finds we see the fewest Neanderthal alleles expressed in our brains and testes.