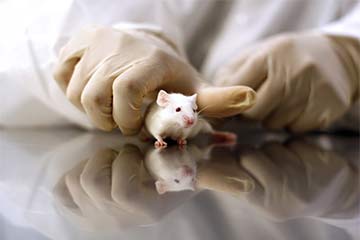 Researchers don't use mice just because they're cheap and reproduce quickly. Their DNA is very close to humans'.
Brandon Laufenberg/Getty Images

While we often refer to "lab rats" and "guinea pigs" as shorthand for test subjects, it's the unassuming mouse that is widely popular in laboratory study. It dominates the labs due to a few factors, among them that they're inexpensive to buy and easy to breed and house.

But the researchers of the world aren't just choosing mice because they're a cheap date that you can buy in bulk. Consider that the mouse's DNA looks startlingly like ours; in fact, we share more than 90 percent of the same genes as a mouse [source: Koshland Science Museum]. This means that when it comes to the ways our molecules work, you're going to find that mice and people aren't all that different.

Now understand that there are animals that are even closer to us genetically: primates, dogs, pigs. (Yup, you and bacon are practically siblings.) But working with those animals presents more problems. Obviously, they're bigger and more difficult to house and feed. But they also present larger ethical problems that some people are more comfortable dismissing when it comes to our rodent pals. In other words, mice might not be the closest animals to us genetically, but they are one of the closest that we feel comfortable using in studies.

How can studies on mice translate to humans? While we'd like to think that we'd never stoop to running a maze for a treat, the truth is that much of our underlying behavior isn't that different from the behavior of a mouse. There's a reason that tests that measure addiction, reward and learning are conducted on mice: They exhibit the same motivations that we do.

The scope of mice-to-human studies is becoming even broader as we learn more about the mouse genome -- and how to manipulate it. Genetically engineered mice might sound like the stuff of horror films, but consider them a scientist's dream. "Knockout" mice are those that have been manipulated so a certain gene is turned off or inactivated; transgenic mice have foreign DNA incorporated into their genome [source: The Jackson Laboratory]. These kind of mice are an extraordinary resource for modeling human disease; for instance, research has found that mice that are genetically mutated to carry the BRCA1 gene (a human breast cancer gene) behave more similarly to human cancer patients than those mice who have had a tumor physically transplanted in. Also, knocking out the leptin gene in mice showed that this hormone regulated appetite. Now, leptin is used in treating some people who are obese [source: European Commission].

Author's Note: How can studies on mice apply to humans?

It's really disheartening to think that a mouse has the same kind of frustration trying to make its way around a maze that I feel when I play Scrabble on my iPhone, but it's pretty accurate. I would like to think that if I was rewarded with a piece of cheese for a good word, however, I would be able to win a lot more often.

Is spinach really a good source of iron or not?
How Adhesive Tape Works
Bacon Seaweed Makes Everything Better