How can studies on rats apply to humans? 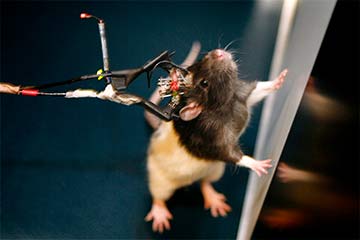 Sensors are attached to electrodes embedded in this rat's brain. Researchers in Norway used this experiment to help determine that the brain makes memories using a kind of GPS navigation system, and codes memories spatially.
© Aristide Economopoulos/Star Ledger/Corbis

When drawing up a list of reasons that rodents are ideal for research and biomedical study, we often find ourselves first pointing to the logistics of experimentation and noting that it's helpful to have an animal that's cheap, available in large quantities and small. With those criteria, it's no wonder that creatures like fruit flies, roundworms and mice are helpful to have around the lab. But in some cases, having a small subject isn't entirely ideal; consider that researchers testing, for example, the efficacy of a physical intervention like surgery would consider a larger animal such as a rat a friend indeed [source: NCI].

Perhaps you have already narrowed your eyes and declared that the rat is no friend of yours. After all, rats are dirty, mischievous and terrible roommates -- they drink straight from the milk carton they've chewed through and have little sense of personal space. You might be chagrined to learn that long ago, we were all living together as part of one big family. About 80 million years ago, the rodent lineage and the primate lineage split from the larger mammalian line [source: National Human Genome Research Institute]. Rats are really quite close to us, evolutionarily -- more so than even mice. That means that their brains function more like ours than their mice counterparts [source: Hamilton].

In fact, the mapping of the rat genome has shown that certain areas of rat DNA have an accelerated genomic evolution compared to mice. Rats have some genes found in immunity and the production of pheromones, as well as genes involved in protein and chemical processes [source: National Human Genome Research Institute].

For humans, this kind of genetic match is a boon: Rats have a counterpart to every known human gene associated with disease. A 2013 study also showed that rats -- and not their mouse colleagues -- were capable of exhibiting the full range of Alzheimer's brain changes. The same research was attempted on mice, but the mice didn't have the dramatic death of brain cells that humans showed with Alzheimer's complications. Researchers eventually tried out a line of rats that were known to show age-related health issues, and the rat brains responded in a similar way to those of humans, developing tangles of brain cells and losing neurons [source: Hamilton].

One more note about why rats can apply to human studies. In 2014, the U.S. National Institutes of Health declared that in studies it funds, an equal number of male and female rats must be used. Formerly, there was a strong bias toward male rats; some researchers considered the female rats' estrus (or menstrual) cycles to interfere with study. Studies have now found that the cycles of females don't affect their use in labs, and that males have just as much variability as females [source: Prendergast].

Author's Note: How can studies on rats apply to humans?

Since we know that male and female humans react differently to different drugs, gender parity in rat studies might be a first step to making sure medications are tested effectively [source: Diep]. Applying this new information -- and these new test subjects -- to research might have extremely profound effects on interventions for both men and women.

Why are rodents such popular test subjects?
How Caviar Works
10 Black Scientists You Should Know